It looks like a medieval castle that might date back centuries, with castellated exterior walls and a dragon gargoyle.

But, in reality, this is a modern detached house in Torquay, Devon, that was – perhaps surprisingly – completed less than 30 years ago.

While the grounds and boundary walls are Grade II listed, the four-bedroom house was finished in 1992. Even the original portcullis has been given a 21st century touch, as it is now electronically operated.

The  highly unusual property is in Lincombe Drive, Torquay – the south coast town that was home to the hotel in TV comedy Fawlty Towers – and is on the market via Absolute estate agents for £1.5million.

The modern property is in Devon’s Torquay and is currently on the market with an asking price of £1.5million 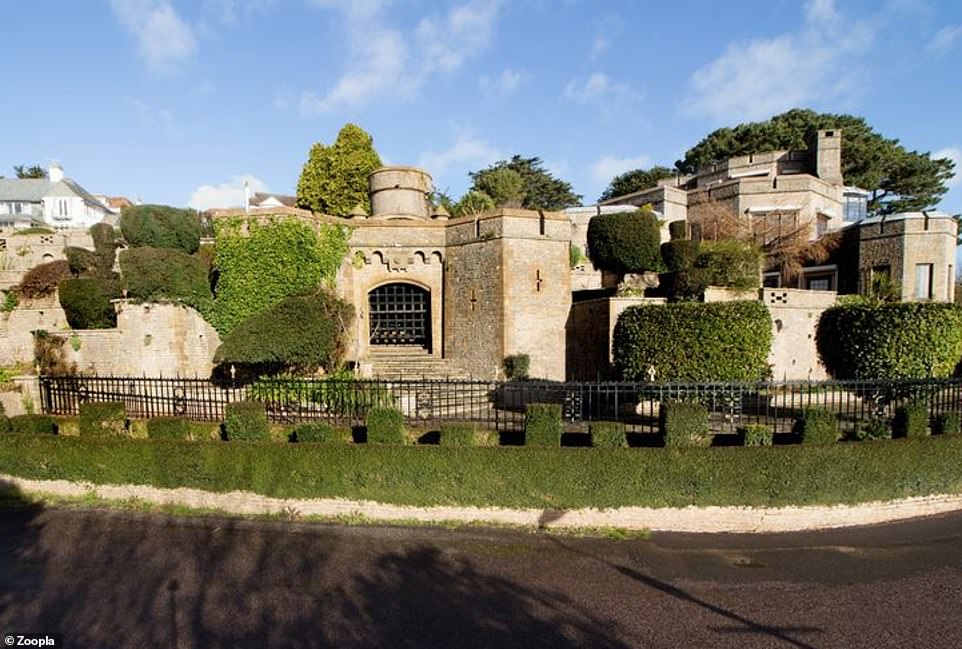 The four-bedroom detached house is called Lincombe Keep and was built using Somerset stone to blend in with its stunning Grade II listed surroundings. And it is now on the market for sale, via Absolute estate agents,for £1.5million.

The estate agent explained that the property is in ‘one of Torquay’s most exclusive residential areas’.

The listed walls were built in the style of a castle in the early 20th century by Frederik Harrild, an ex-pupil of famed architect Sir Edwin Lutyens. 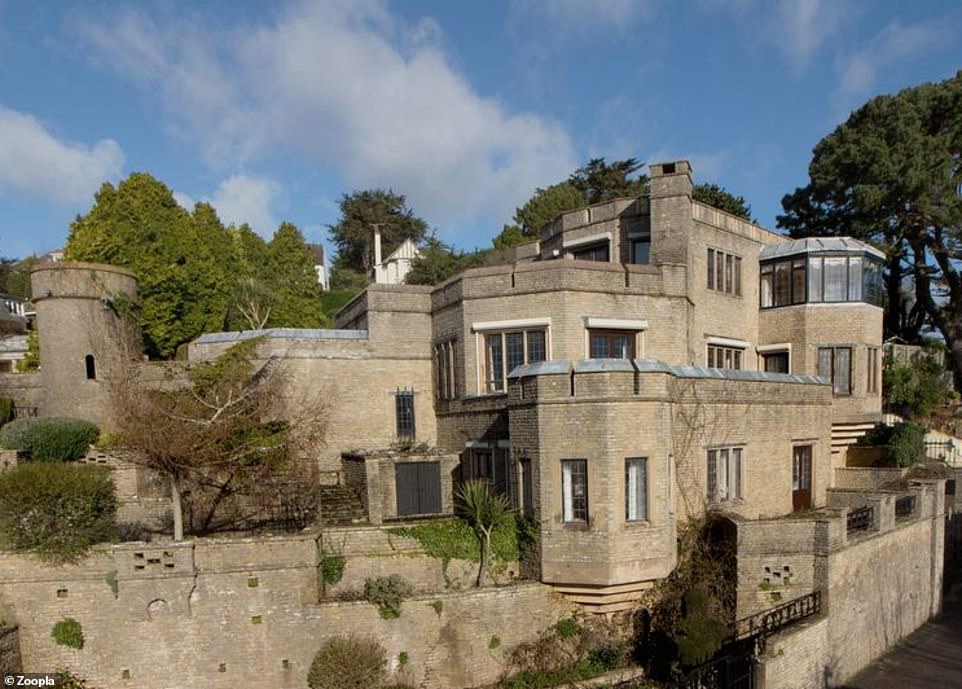 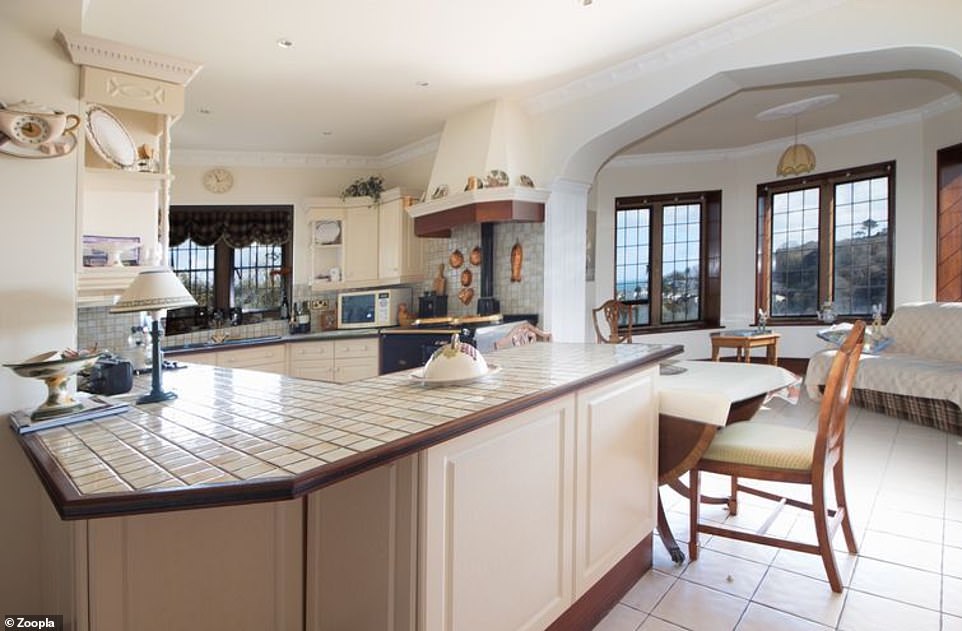 The interior design reflects the true age of the property, which was completed in 1992 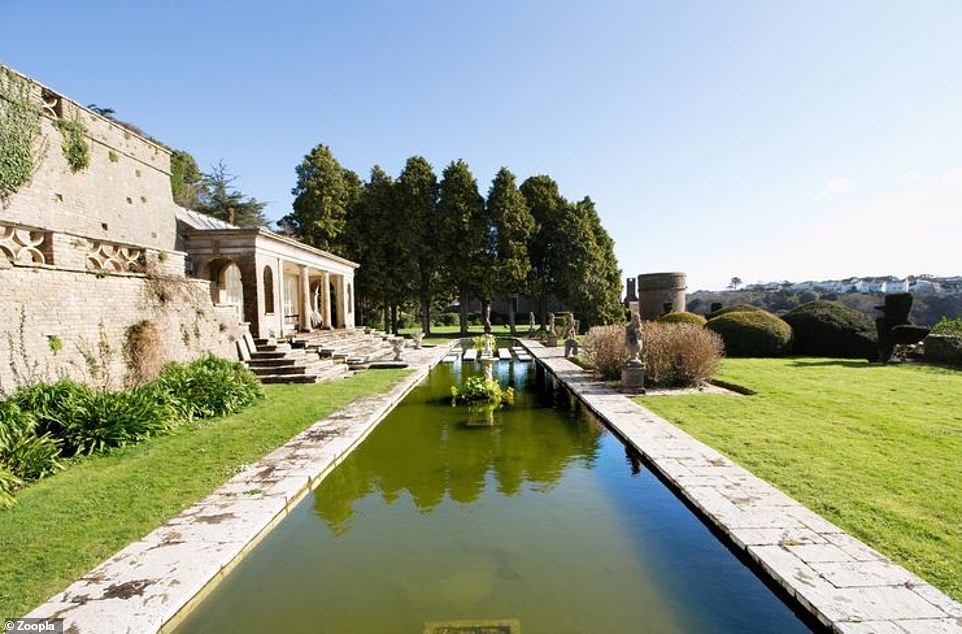 Much older: The grounds of the Devon property and the boundary walls are Grade II listed 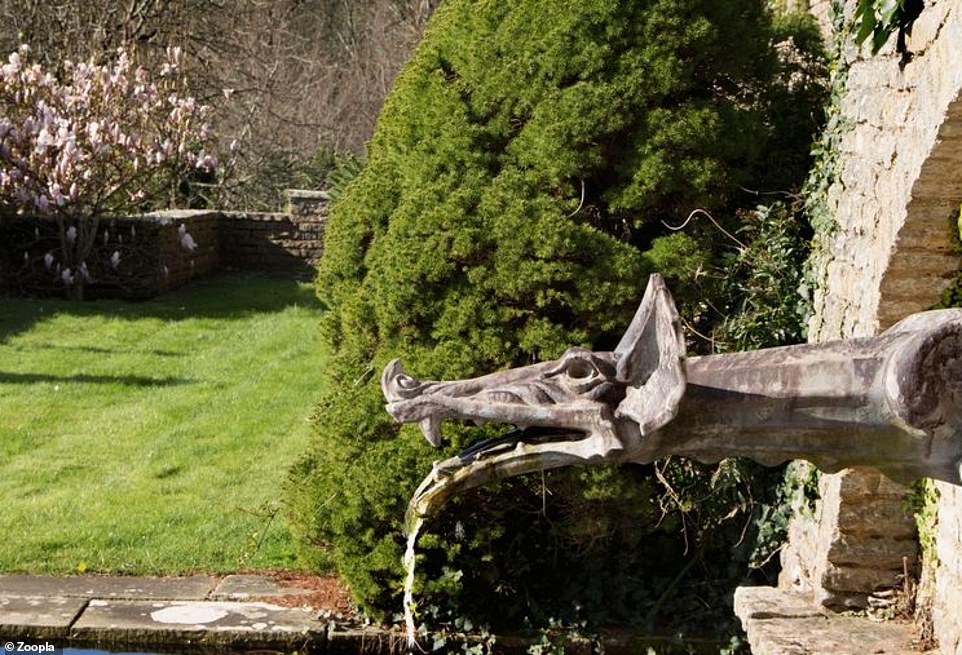 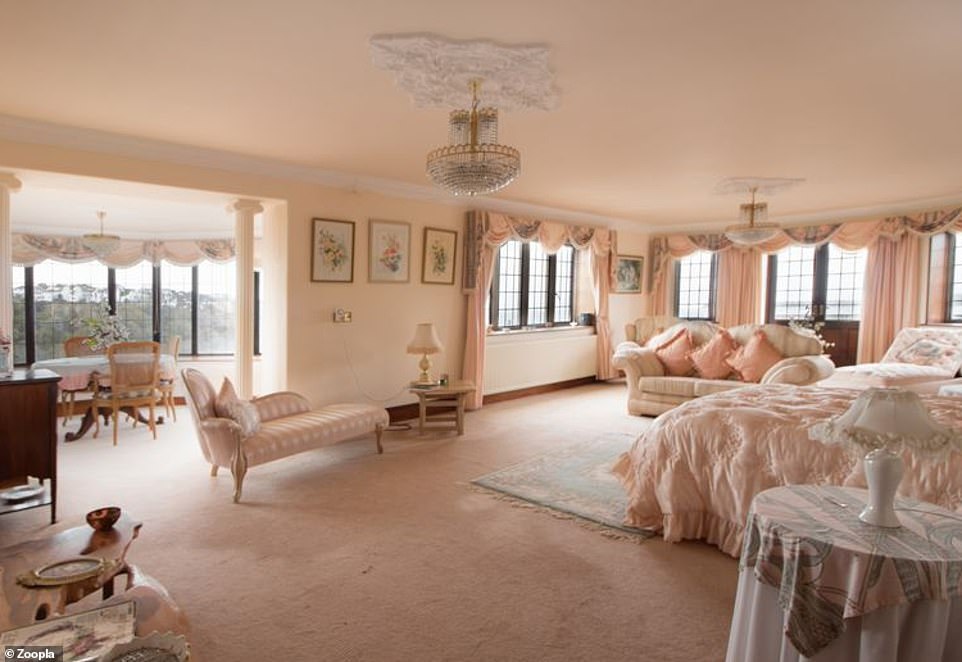 The property is approached via the portcullis, with a path leading to the double front doors.

There is a spacious split level reception hallway leading to the upper and lower ground floors.

The upper level includes a living room with uninterrupted sea views and a private sun terrace.

The grounds were originally designed by Harrild, who was based in Totnes and a former pupil of the architect Sir Edwin Lutyens.

The grounds were formerly attached to a property in Oxlea Road called ‘Castle Tor’.

The new house (Lincombe Keep) was built in the south-east corner of the site to the designs of John Pritchard in 1989-92. 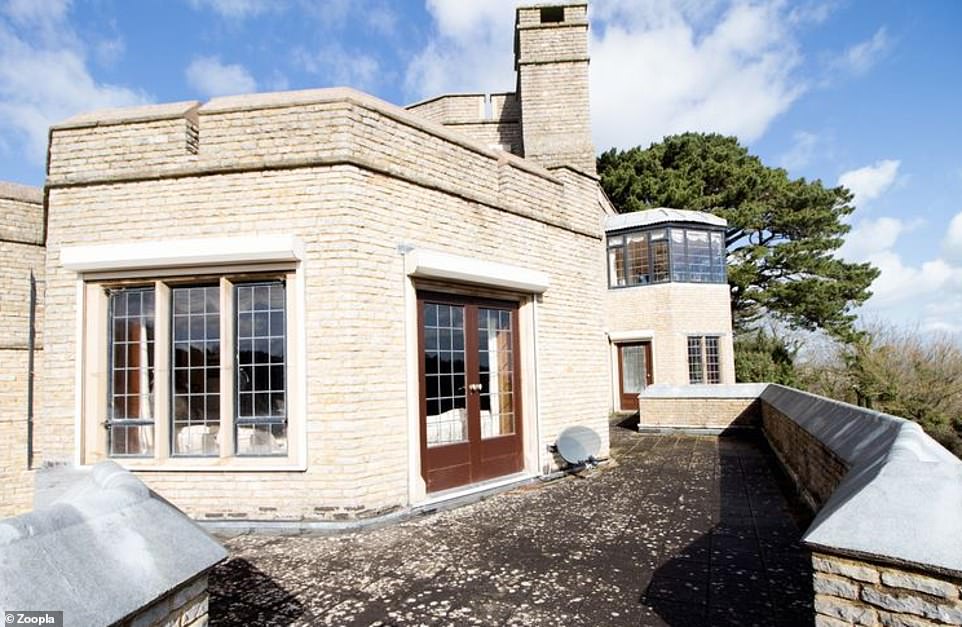 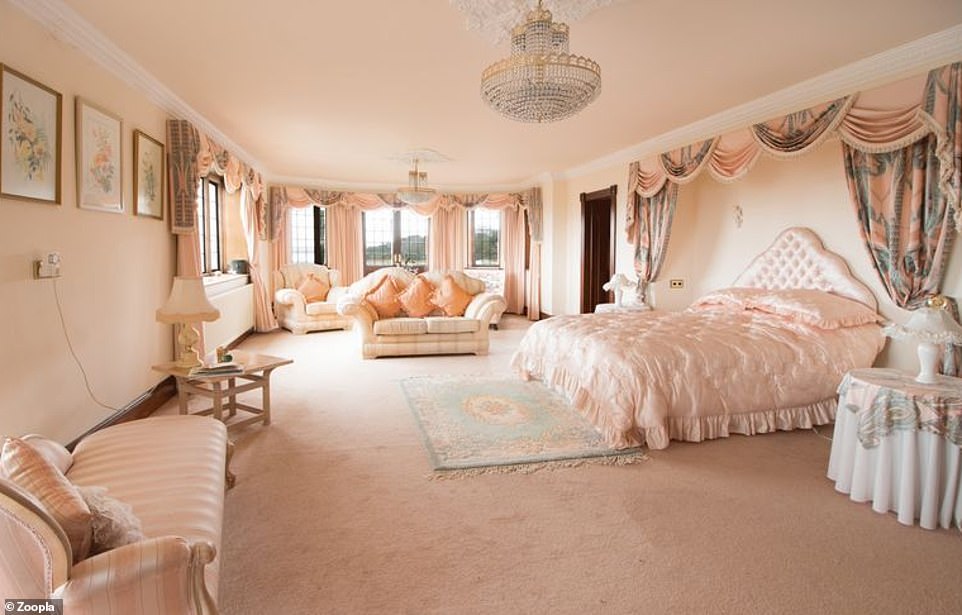 There are four large bedrooms at the house, with this one having enough room for sofas 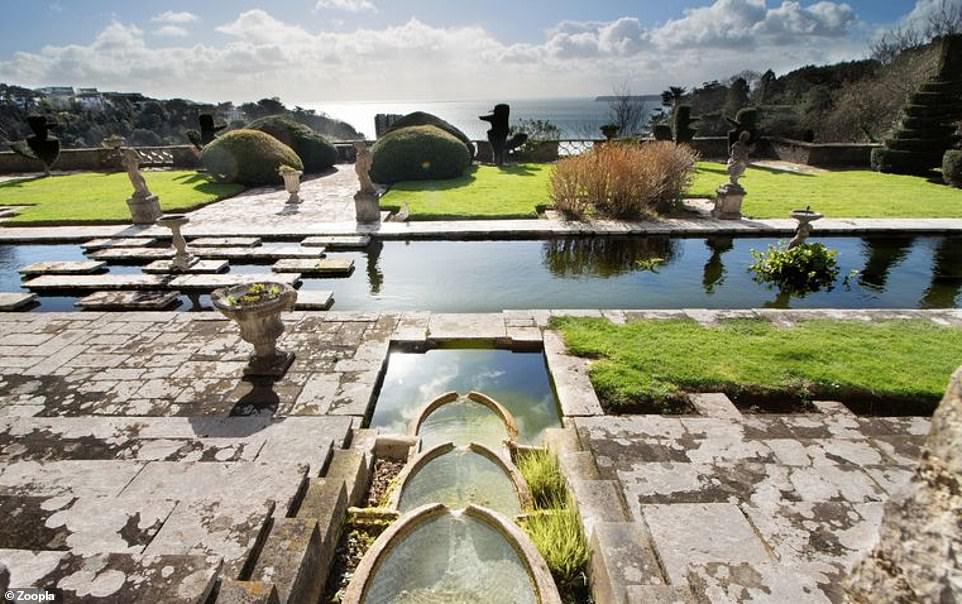 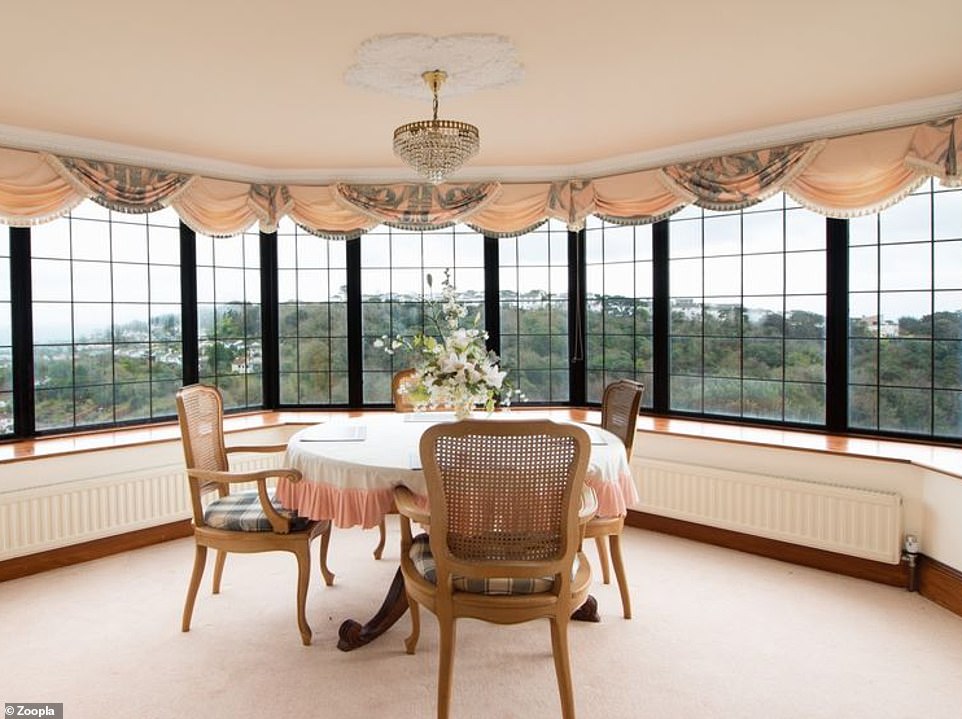 In its advertising material, the estate agent explains that the modern home was designed by John Pritchard Architects.

It claimed: ‘Every detail of the grounds, from the fine wrought iron railings and a gate leading to a sculptured dragon gargoyle that feeds a fountain pool close to the tower, reveals a close attention to design and knowledge of traditional craft techniques.’

The average price of a property in Torquay is £242,015, according to property website Zoopla, which compares to a typical value of a home in Britain of £312,138. 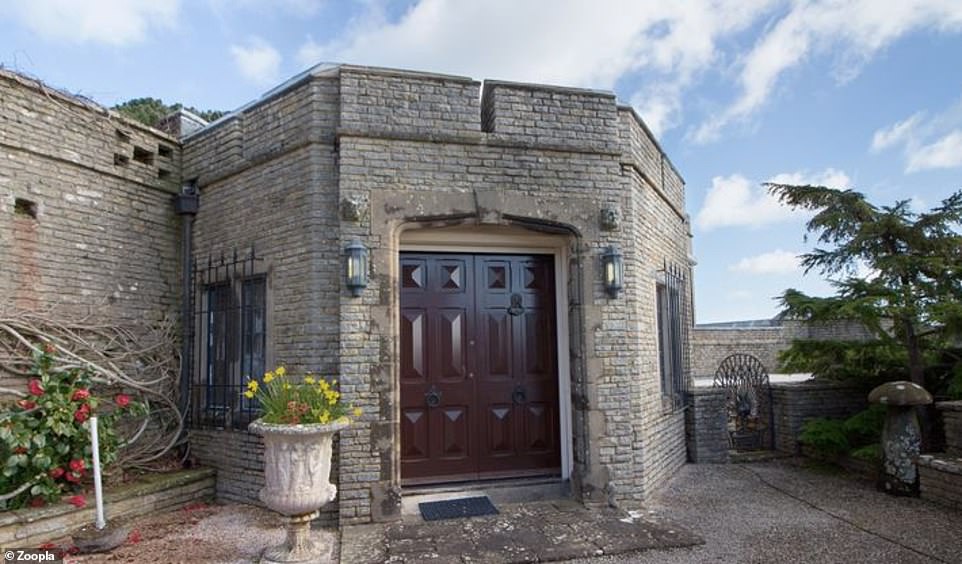 What an entrance! A path leads to the double front doors, made from hardwood 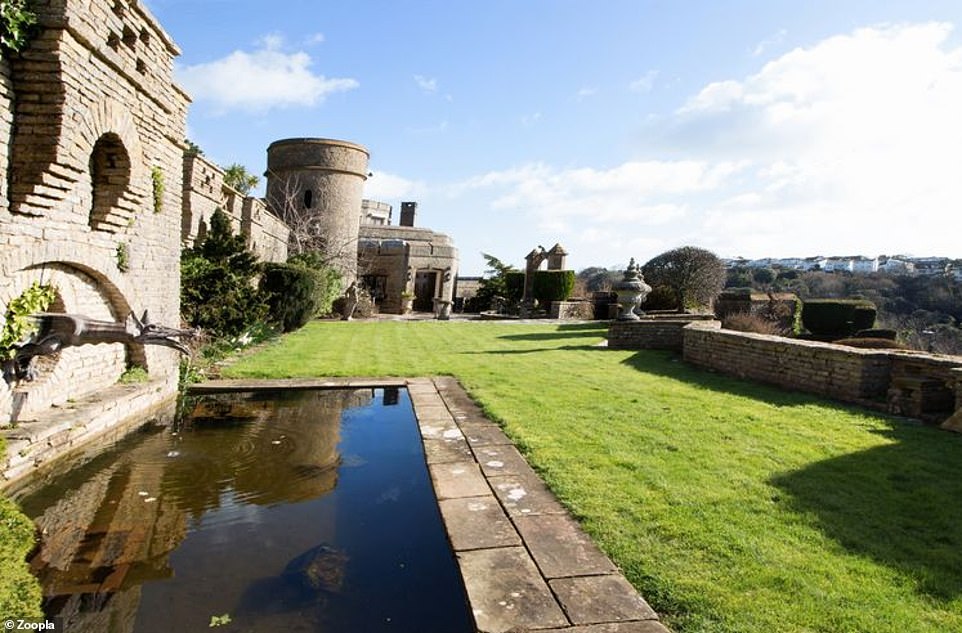 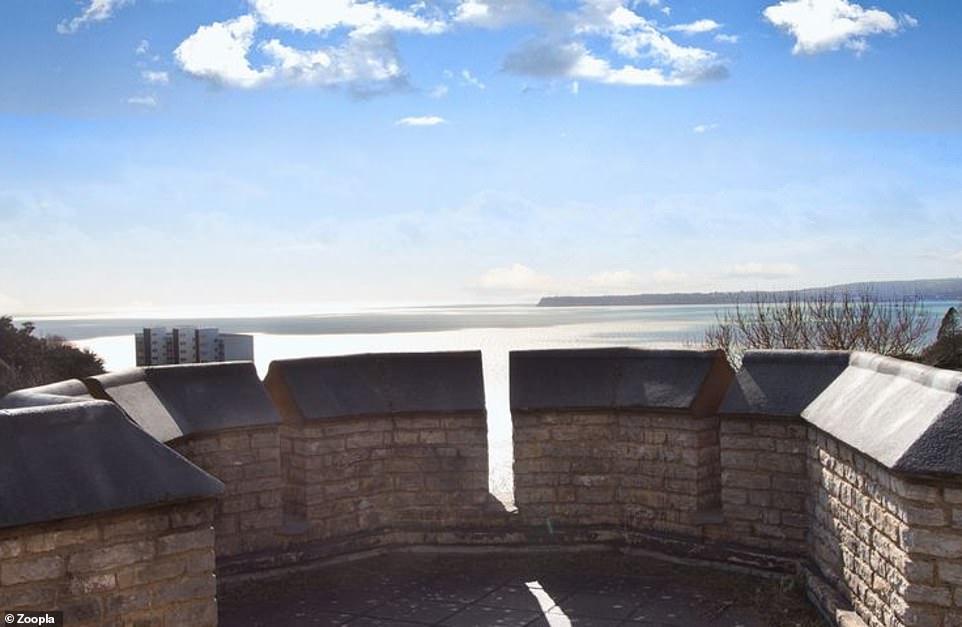 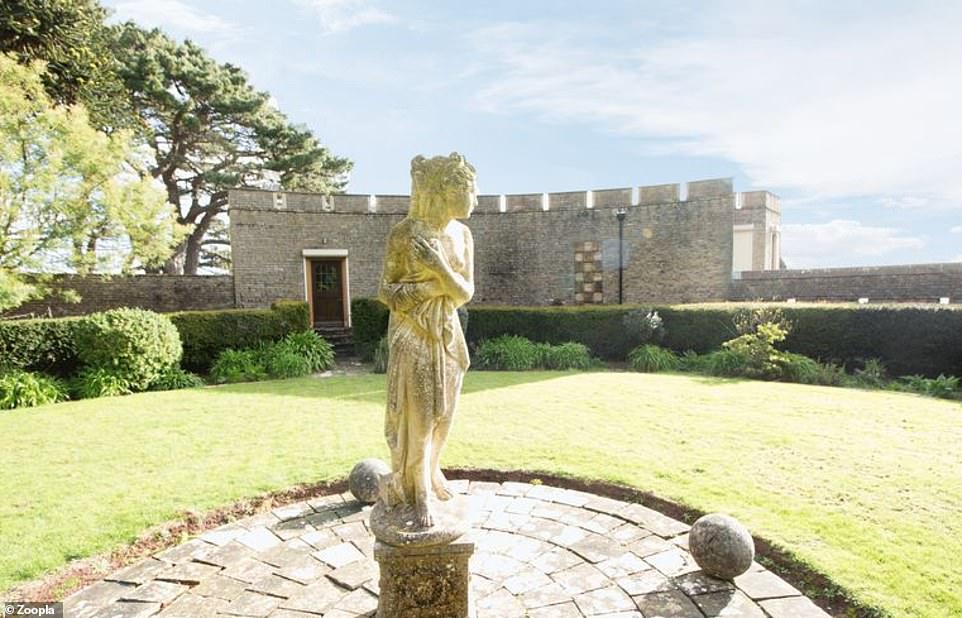 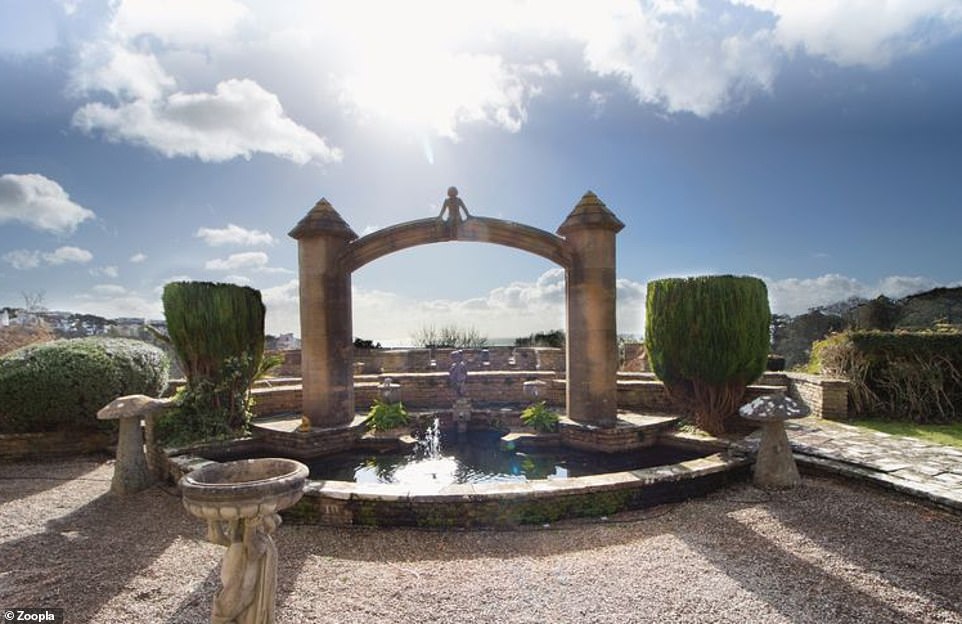 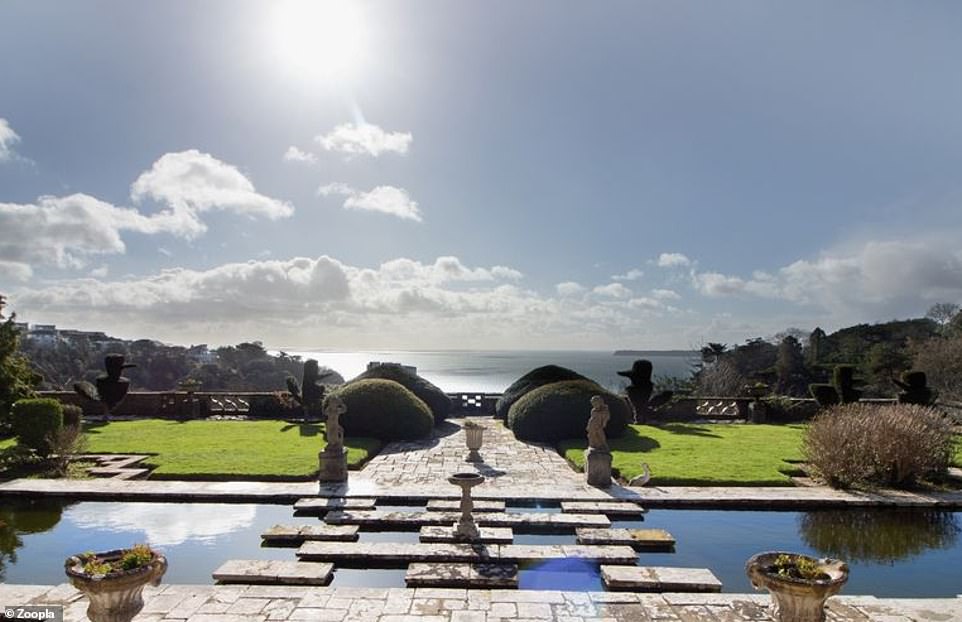 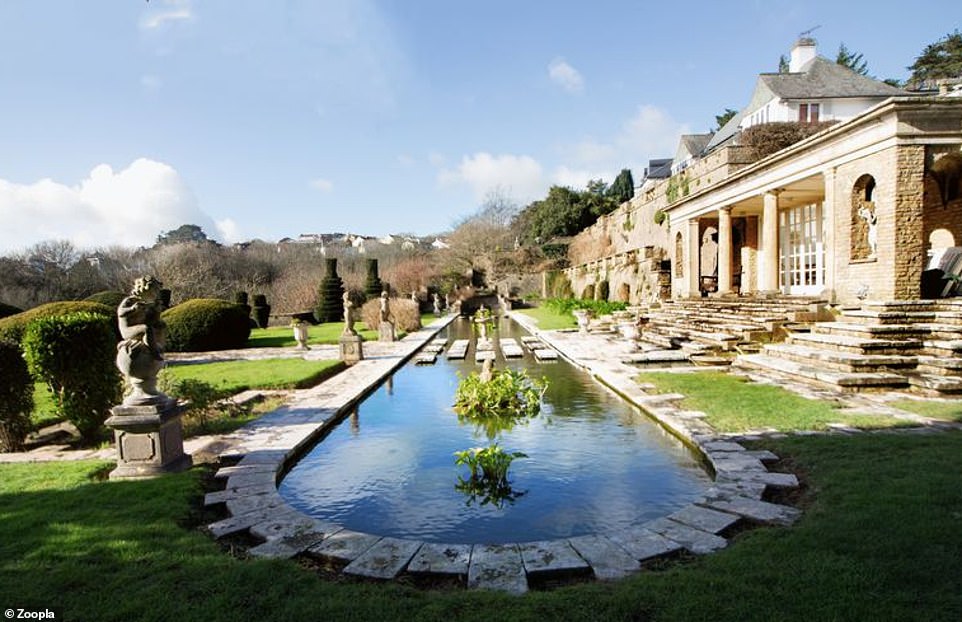 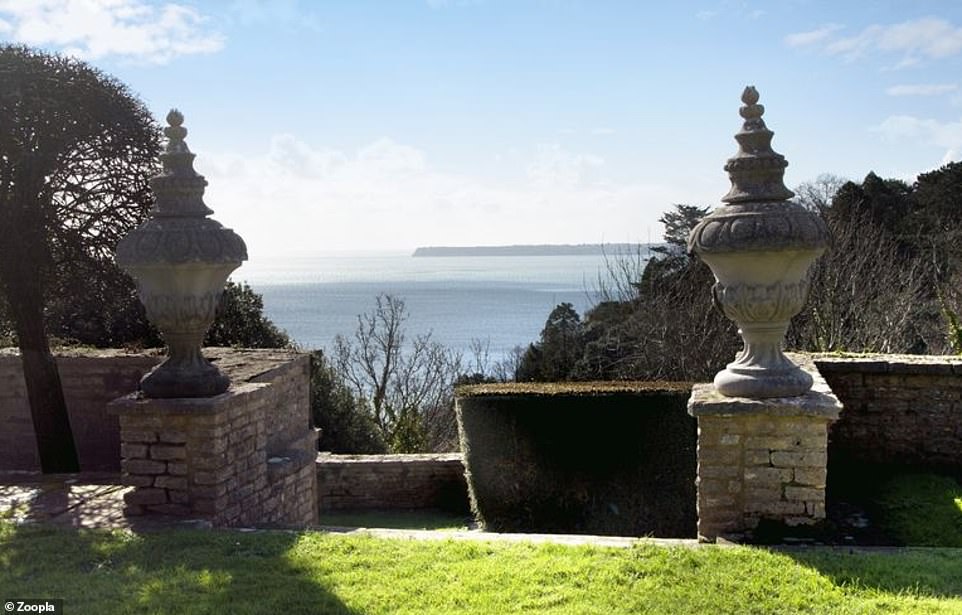 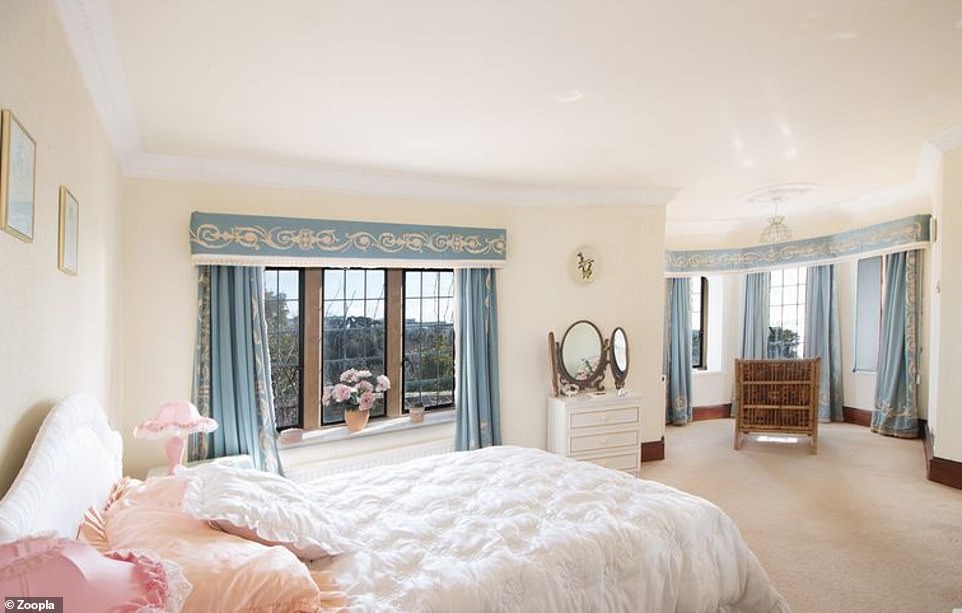 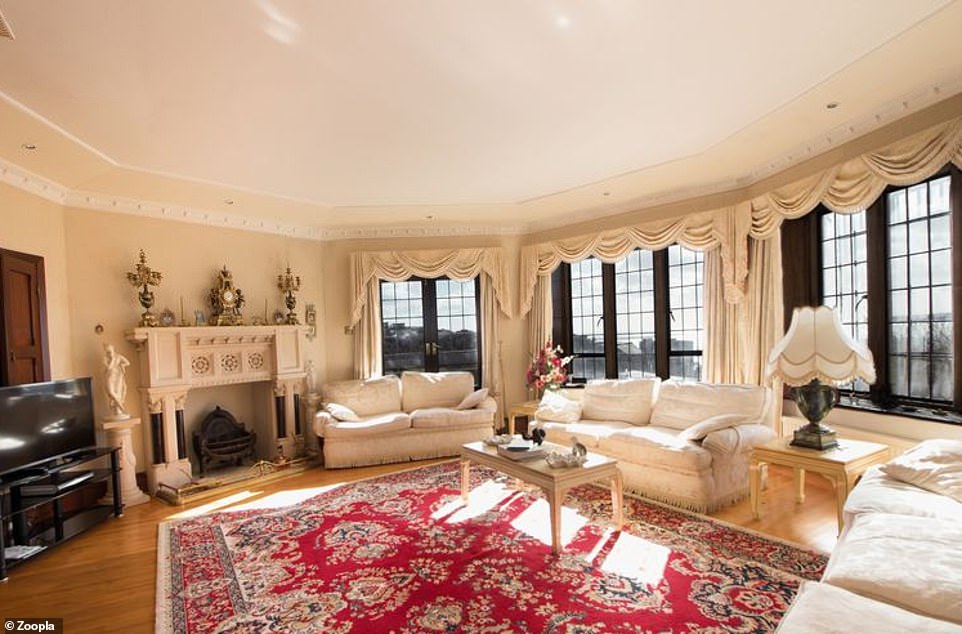 The living room includes wooden flooring and a decorative fireplace

Zoopla’s Annabel Dixon said: ‘Calling all Game of Thrones fans. If you harbour a desire to be master of your own castle, turn your attention to the English Riviera.

‘With its castellated walls and portcullis, not to mention stone statues, canal-style pond and dragon gargoyle, you’d be forgiven for thinking that Lincombe Keep harks back centuries.

‘But this property was in fact built less than 30 years ago in Torquay, the seaside resort that provided the backdrop to the comedy series Fawlty Towers.

‘While it may be a modern property, Lincombe Keep has got pedigree. The Grade II-listed grounds were originally designed by Fred Harrild, who was believed to be a pupil of famed architect Sir Edwin Lutyens.’ 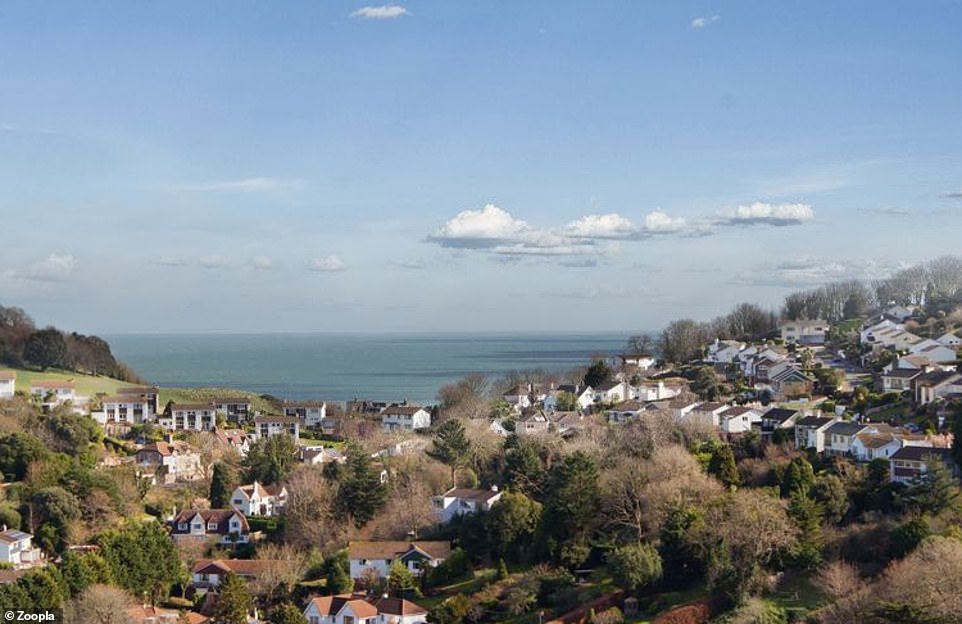 The average price of a property in Torquay is significantly lower at £242,015, according to Zoopla 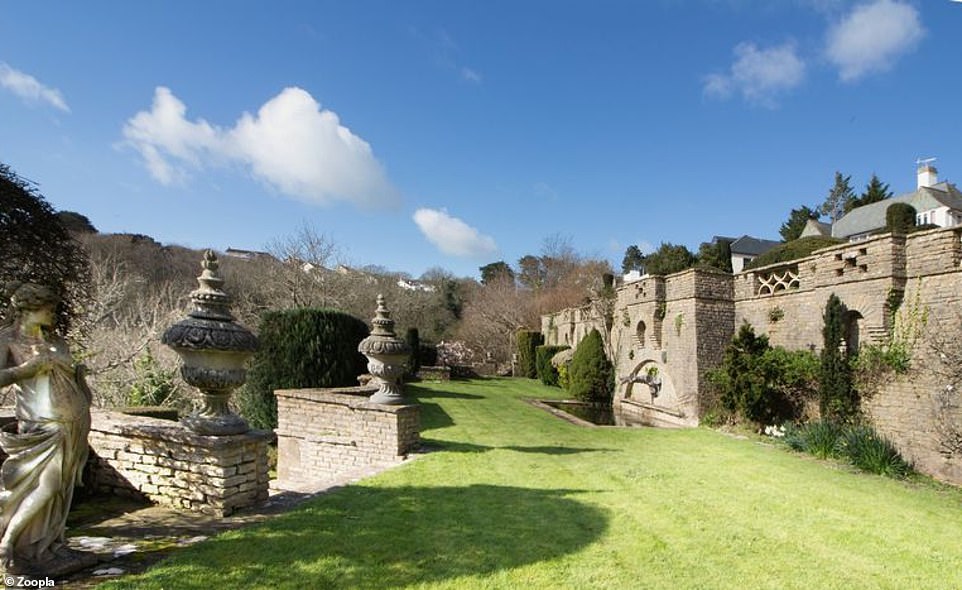 HISTORY OF THE GARDENS

The terrace garden dates back to the 1920s, and include terraces, pool and an orangery designed by Fred Harrild. The grounds were previously undeveloped and attached to a property in Oxlea Road called ‘Castle Tor’.

Castle Tor was original known as Glengorse, and was built on a previously undeveloped site that formed part of Lord Haldon’s estate in the parish of St Marychurch – to the north of Torquay.

From 1922, Horace Pickersgill, the son of a Leeds bookmaker, who had been advised to spend the winters in Torquay, bought around 33 acres in the vicinity of Glengorse.

The house and architectural elements of the garden were designed by Frederick Harrild, who had been a trainee of Sir Edwin Lutyens in 1907.

He set up his own practice, designing houses in Sussex and Devon and by the late 1920s had an office in Totnes.

The planting schemes and design details are attributed to George Dillstone of R Wallace and Co, Tunbridge Wells. 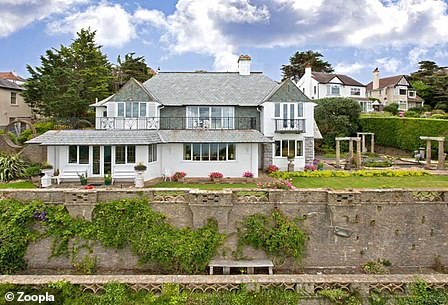 Pickersgill reportedly sold Glengorse in 1950 to Mrs Dorcas Croft of Birmingham, and the property subsequently passed through several hands.

Around 1980, the property was divided up for development, with the original house retaining the upper terrace and the south-west half of the second terrace with the canal and orangery.

The new house called Lincombe Keep was built in the south-east corner of the site to the designs of John Pritchard in 1989-92.

The remainder of the second terrace was added to the Lincombe Keep gardens in 1997.

Young seek income cover due to Covid-19 but will it pay out?