A horrific swimming pool accident left a teenager without her intestines and unable to eat food for the last 10 years.

Salma Bashir, 16, loves to eat seafood – she’ll take savory over sweet any day – but she hasn’t been able to eat properly for over 10 years.

The teenager doesn’t have small or large intestines or a gallbladder; while her stomach is an open wound that needs to be dressed daily and constantly leaks.

Salma, who lives in Pittsburgh with her mom and two younger brothers, still chews food at home so she gets the taste of her mom’s home cooking, discretely wrapping her chewed mouthfuls in tissue and throwing away in a plastic bag at her feet.

But she’d give anything to eat properly again.

Salma Bashir, 16, needs five transplants that will cost $3 million after her first transplant was rejected 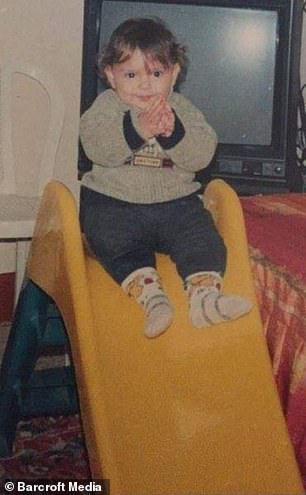 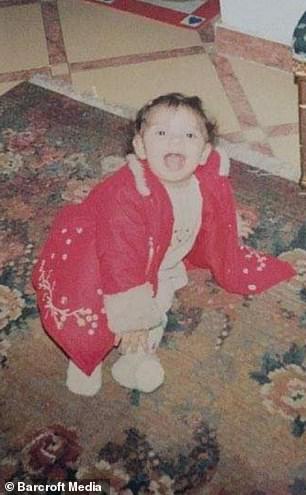 Salma lost her intestines in an accident while on holiday with her family in Alexandria, Egypt. Then-five-year-old Salma wanted to play in the baby pool while her pregnant mother kept an eye on her older brother in the bigger pool. She sat on the pool’s suction valve and the force was so strong that it ripped her small intestines from her body, before anyone had a chance to pull her away

Salma told Barcroft TV: ‘I am not the kid who goes, “Oh my God, ice-cream!” I love savory stuff, I like meat, I like seafood, I don’t always have seafood but I love seafood!

‘I don’t technically need to eat but yet somehow I get the sensation that I’m hungry.

‘It would be awesome to swallow the food again.’

Small for her age, Salma relies on a TPN, total parental nutrition bag, hooked up to her body, to get the required nutrients.

‘It’s basically a bag full of fluids with all the nutrition you need, such as calcium, sodium, glucose, all the vitamins and everything you need. I’m hooked up to that for 20 hours a day. When it first gets hooked up, it’s about 15 to 20 pounds.

‘I’m about four-foot-three, so I’m very small. The reason I don’t absorb food is because I don’t have the intestines at all. So there’s nowhere for it to go if I eat anything.’

Salma lost her intestines in an accident while on holiday with her family in Alexandria, Egypt.

Then-five-year-old Salma wanted to play in the baby pool while her pregnant mother kept an eye on her older brother in the bigger pool.

Her mother, Dena Ghaly, remembers: ‘She went one time and she came back, she went another one it is very close I can see her it is just the third time she went and she didn’t come back.’ 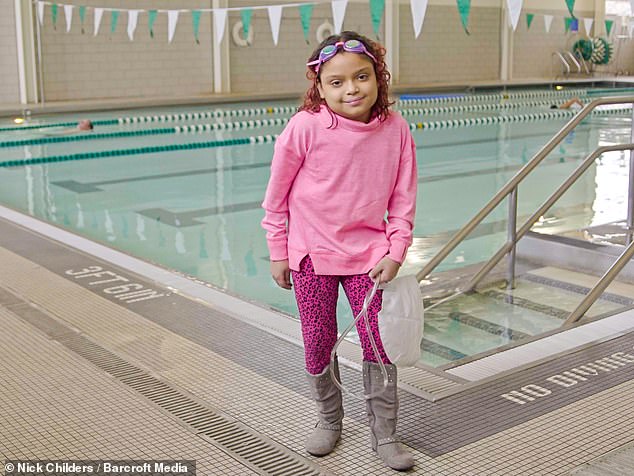 Small for her age, Salma relies on a TPN, total parental nutrition bag, hooked up to her body, to get the required nutrients

Salma had sat on the pool’s suction valve and the force was so strong that it ripped her small intestines from her body, before anyone had a chance to pull her away.

Salma added: ‘I was just swimming all of a sudden, I just sat on it by accident. I know the lifeguard tried to pull me out and he couldn’t because the suction was so much.

‘My dad tried to pull me out. And then I know a couple people finally were able to get me out, and when I was taken out, it was so traumatic.’

‘I found someone carrying her and all her intestines came out from her body, I couldn’t believe that it was intestine I thought at the beginning it was her swimming suit.’

Salma added: ‘It was horrible. But the good thing is it was so bad that I basically blacked out after a little while.’

Given just weeks to live, Salma’s parents traveled with their young family to Pennsylvania for life-saving surgery.

Salma was then on a waiting list for a transplant and after a year-and-a-half – plus fundraising for the $300,000 surgery – she had the operation that her family believed would be the start of the rest of Salma’s life.

However, the small intestines transplant rejected and after six months it had to be removed along with Salma’s large intestines and gallbladder; her stomach also had to remain open.

She said: ‘My stomach was open so bad, we could literally see my insides. It’s healing slowly. But now it’s not getting healed anymore. It’s filled with tissue, so thankfully you can’t really see insides or anything, but it’s leaking 24/seven.’ 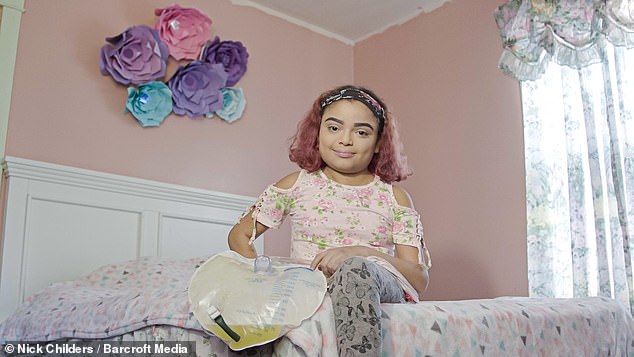 Salma’s family lives in the US on a visitor’s visa due to her medical condition, which means she is not eligible for public assistance and no insurance company will cover her

The stomach wound needs to be dressed constantly and limits Salma’s mobility. She home schools and uses a wheelchair to get around; it’s rare to go a month without an ER visit. And all of these hospital trips cost a lot.

Salma’s family lives in the US on a visitor’s visa due to her medical condition, which means she is not eligible for public assistance and no insurance company will cover her.

For the same reason Dena, a qualified doctor in her home country, cannot work in the US.

Doctors have advised that if Salma were to have a transplant again she would need to have five organs replaces: her small intestines, large intestines, liver, stomach, and pancreas.

There is no guarantee that it would be successful and the estimated cost of the five-organ transplant is $3 million.

But that’s not stopping Salma from giving it everything she’s got: she has raised $15,000 already on her GoFundMe page.

She now has 56,000 followers on her ‘Slay With Salma’ makeup tutorial Facebook page, though she uses this as much for a form of escapism as publicizing her condition.

Dena said: ‘She still smiles, she’s still [a] fighter, she still challenges with her situation. She’s doing very good things with her condition.’

Salma added: ‘I always look forward to that part of the day whenever I do my makeup. I mean, I’m always in bed and it takes me so much energy to get out of bed and actually even sit in a chair because of my stomach.

‘This is sort of my free time – you don’t want to think about medical, I just want to focus on something that makes me happy.’

Coronavirus UK: Pendle in Lancashire at risk of local lockdown

Processed foods such as pizza make people eat too much, too...