Scans of brain samples taken from dolphins that died after getting stranded on beaches reveal they were suffering from a form of dementia – caused by toxic algae.

Exposure to chemicals found in blooms of blue green algae have been linked to a degenerative brain condition likened to Alzheimer’s.

The rising number of these blooms is believed to be caused by global warming and agricultural fertilisers finding their way into the world’s waterways.

Scans of brain samples taken from dolphins that died after getting stranded on beaches reveal they were suffering from a form of dementia – caused by toxic algae. These images form the brain samples of stranded dolphins reveal amyloid plaques, a telltale sign of the disease

Researchers took samples of brain tissue from 14 of the marine mammals that died after becoming stranded on the beaches of Florida and Massachusetts.

Amyloid plaques, a telltale sign of the Alzheimer’s in humans, were discovered in the tissue of the stranded animals.

The findings act as a warning to humans to avoid harmful algal blooms that plague lakes, ponds, canals, rivers and reservoirs.

But experts caution the toxins should not be allowed to enter the food chain as the damage to humans could have dire consequences.

Scientists are unable to say whether long-term exposure to the toxin triggered Alzheimer’s in humans but say it may be an unnecessary risk.

Brains of 13 of the dolphins in the study were found to be tainted by both amyloid plaques and the environmental toxin BMAA produced by cyanobacterial blooms.

BMAA was found in high concentrations in the dolphins’ highly evolved cerebral cortex, which is responsible for its sophisticated sonar navigation.

One other dolphin studied was injured by a boat and had no signs of BMAA. 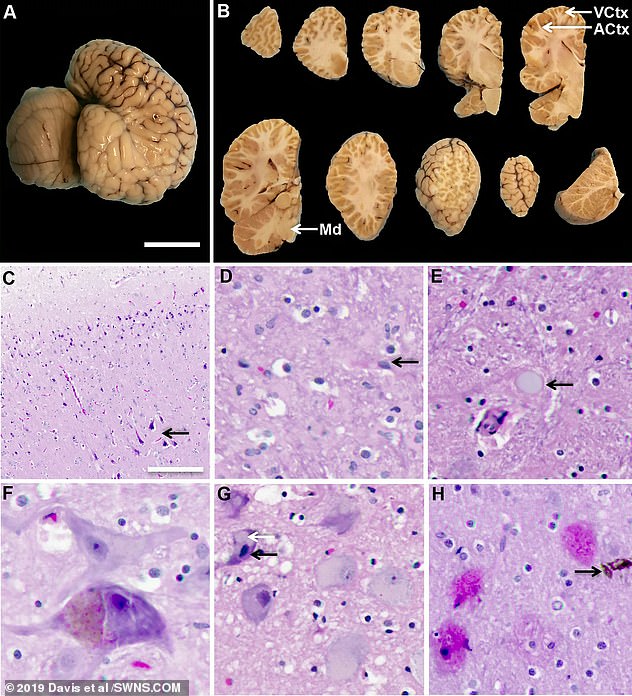 The findings act as a warning to humans to avoid harmful algal blooms that plague lakes, ponds, canals, rivers and reservoirs. The rising number of these blooms is believed to be caused by global warming and agricultural fertilisers

Alzheimer’s disease is a progressive, degenerative disease of the brain, in which build-up of abnormal proteins causes nerve cells to die.

This disrupts the transmitters that carry messages, and causes the brain to shrink.

More than 5 million people suffer from the disease in the US, where it is the 6th leading cause of death.

As brain cells die, the functions they provide are lost.

That includes memory, orientation and the ability to think and reason.

The progress of the disease is slow and gradual.

On average, patients live five to seven years after diagnosis, but some may live for ten to 15 years.

Study leader Dr David Davis at the University of Miami, said: ‘We found amyloid plaques and damaged neurons in brain tissues from dolphins that had died on the beaches of Florida and Massachusetts.’

‘As the world’s climate warms, harmful algal blooms are becoming more frequent, including in eastern China, which has seen some of the largest cyanobacterial blooms on Earth, and North America.

‘Exposures to cyanotoxins are a public health concern as they are linked to organ system damage and disease.

‘Examining the levels of the cyanobacterial toxin BMAA in apex predators, such as dolphins and sharks, provides a powerful bio-indicator of the potential for human exposures.

‘BMAA is produced by cyanobacteria that are sometimes seen as surface blooms, but can occur in the water column and in benthic mats in lakes, shallow estuaries and bays.

‘In marine systems, BMAA enters the food chain via crustaceans and bottom-feeding fish, and then accumulates into long-lived apex predators like sharks. 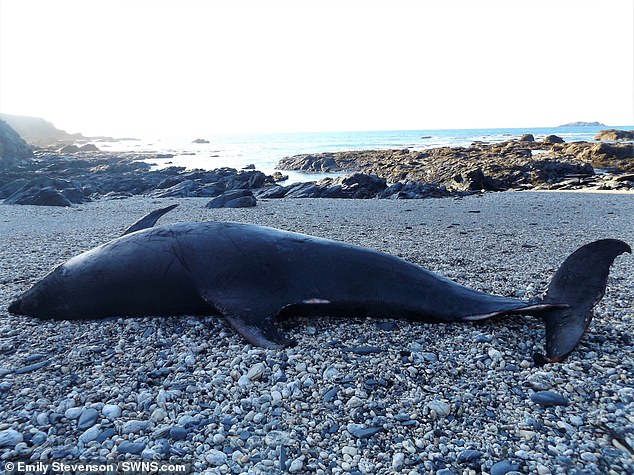 Brain samples of dolphins that died after getting stranded on beaches reveal they may have been suffering from Alzheimer’s. It is believed it may have been brought on by exposure to toxins released from algae blooms in coastal waters (file photo)

WHAT ARE THE RISKS OF ALGAE BLOOMS?

Technically called cyanobacteria, the ancient class of organisms that create the blooms are present nearly everywhere water is found, but thrive in warm, still bodies like lakes and ponds.

They also create a unique class of toxins, the impact of which on humans is only partly understood.

Long linked to animal deaths, high doses of the toxins in humans can cause liver damage and attack the nervous system.

In the largest outbreaks, hundreds have been sickened by blooms in reservoirs and lakes, and officials in some areas now routinely close bodies of water used for recreation and post warnings when blooms occur.

But less is known about exposure at lower doses, especially over the long term.

Small studies have linked exposure to liver cancer – one toxin is classified as a carcinogen, and others have pointed to potential links to neurodegenerative disease.

‘We now report that another apex predator, dolphins, when exposed to cyanobacteria or diets of crustaceans and fish containing BMAA, bioaccumulate the toxin in their neuroproteins.

‘The differences in BMAA concentration may be due to differences in diet, occurrences of algal blooms, varying phytoplankton species or modes of stranding.’

Co-author of the study, and professor of neurology, Dr Deborah Mash also from the University of Miami added: ‘Dolphins are an excellent sentinel species for toxic exposures in the marine environment.

‘With increasing frequency and duration of cyanobacterial blooms in coastal waters, dolphins might provide early warning of toxic exposures that could impact human health.’

Oceanographer Professor Larry Brand at the University of Miami warned: ‘We cannot say for sure that chronic exposure to cyanobacterial blooms can trigger Alzheimer’s in humans but it is a risk that I personally am unwilling to take.’

And ethnobotanist Dr Paul Alan Cox at the Brain Chemistry Labs in Jackson Hole, Wyoming, noted the neuropathology and brain toxins in the dolphins are similar to those found in the brains of Chamorro villagers in Guam who suffered from an Alzheimer’s-like disease.

He said: ‘The $64,000 question is whether these marine mammals experienced cognitive deficits and disorientation that led to their beaching.

The study was published in the journal PLOS ONE.

Missing Cryptoqueen: Why did the FCA drop its warning about the OneCoin scam?

Rare ‘boomerang’ earthquake is tracked across the Atlantic ocean

Lawmakers up the ante in push for sustained cash payments amid...

West Ham in talks to make Michail Antonio one of club’s...

Lawmakers up the ante in push for sustained cash payments amid...

Could BATS hold the key to ‘eternal life’?