A mother with HIV has revealed her partner and their child are free from the infection.

Sasha Goodman, 30, from Milton Keynes, contracted HIV from her mother in the womb and was diagnosed at five years old.

Tormented by bullies throughout her childhood, she didn’t take her medication properly as it served as a constant reminder of her illness.

But at 20 years old, she realised the severity of her illness when her mother, who also was unmedicated due to stigma, died of AIDS at the age of 42.

After meeting partner Jay Hart, 32, seven years ago, Ms Goodman was surprised when he wasn’t fazed by her HIV diagnosis.

Ms Goodman was then encouraged to start adhering to her regimen of anti-retroviral therapy (ART) pills, which keep the level of HIV in the body undetectable, meaning patients can have unprotected sex without fear of passing it on.

Ms Goodman, who already had one child before meeting her current partner, has since had a child with Mr Hart.

Sasha Goodman, 30, and Jay Hart, 32, have had a child together despite Ms Goodman having HIV. Ms Goodman, who already had one child before meeting Mr Hart, is speaking out about the disease to break down the stigma 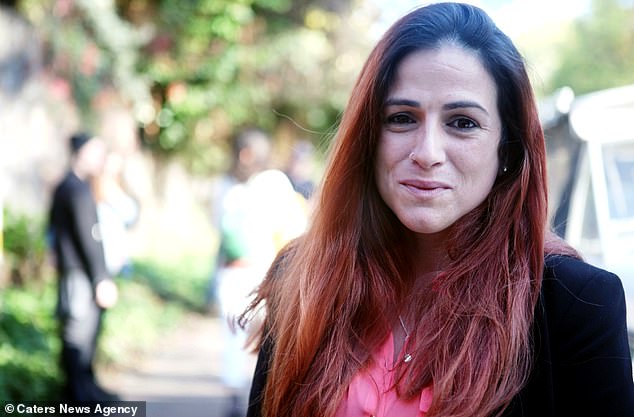 Ms Goodman from Milton Keynes, contracted HIV from her mother in womb and was diagnosed at five years old

The National Aids Trust states 97 per cent of people living with HIV who are on treatment are virally suppressed, and the Terrence Higgins Trust claim there is enough robust evidence to say, with confidence, that people on effective HIV treatment can’t pass on the virus.

The use of HIV medicines and other strategies have helped to lower the risk of mother-to-child transmission of HIV to one per cent or less in the US and Europe.

Ms Goodman said: ‘I never thought I would ever be a mum, I was petrified to have a boyfriend as I didn’t want to infect anyone.

‘When I met Jay seven years ago in the pub, I did already have my eldest son who I knew didn’t have HIV.

‘I fell completely head over heels in love with Jay but I was scared he might reject me once he found out.

‘He handled it so well, and we used a condom to ensure he was safe whilst he helped me accept that I had HIV.

‘None of my family have HIV despite me and Jay having unprotected sex to start a family, this is something that fascinates some people as they seem to think it’s highly contagious.’

Ms Goodman said people are often in disbelief when she tells them she was born with the disease, and didn’t contract it through unprotected sex – a stigma she would like to break.

She was diagnosed with HIV after she struggled to overcome chicken pox aged five.

Doctors then discovered mother Sharon Goodman, 42, had caught the disease from unprotected sex.

Ms Goodman said: ‘My mum was diagnosed after I was as doctors knew I must’ve caught it before being born due to my young age.

‘It’s thought she caught the disease through not being unprotected during sex at some point in her life.’

Ms Goodman was raised by her grandparents, Jean and Bill Goodman, who have since died. 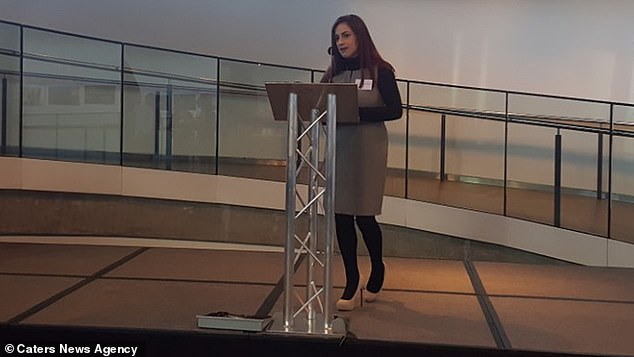 Ms Goodman, who is now a HIV activist, didn’t take her medication properly throughout her childhood and teenage years as it served as a reminder of her illness 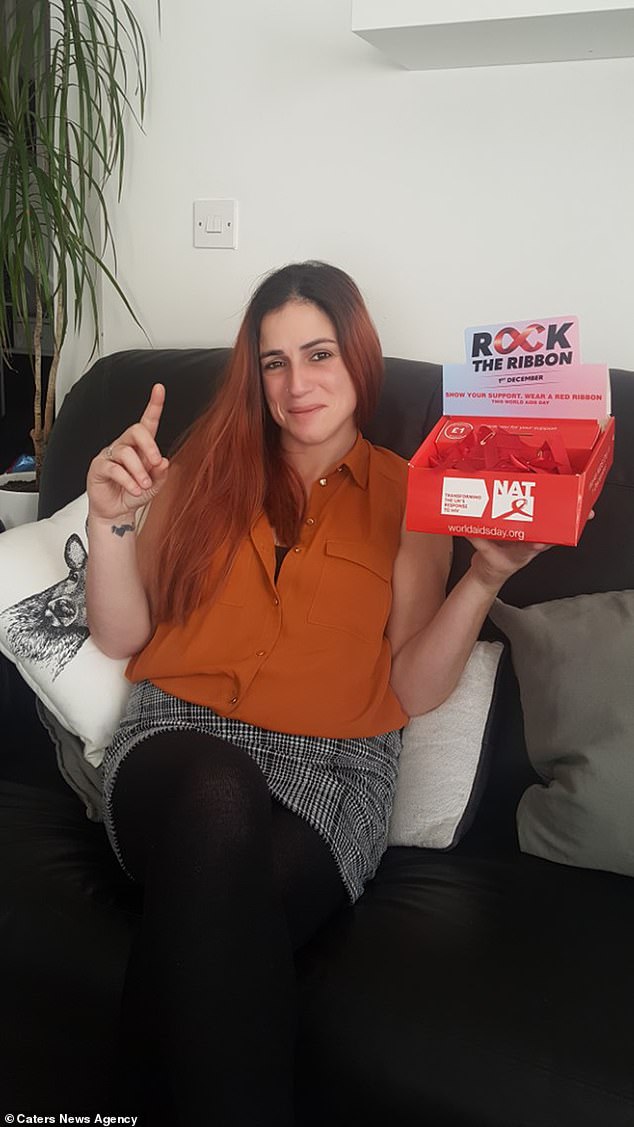 At 20 years old, Ms Goodman realised the severity of her illness when her mother, who also was unmedicated due to stigma, died of AIDS at the age of 42

This can happen through the mucous membranes of the penis, vagina, rectum and sometimes the mouth and throat.

If someone is living with HIV, they are more likely to pass it on to others in the first few months after infection as there are high levels of the virus in their bodily fluids at this point.

If someone with HIV is taking medication and has an undetectable viral load, they cannot pass on the virus. It can take up to six months on treatment to become undetectable.

Someone with HIV can pass on the virus if they have a detectable viral load.

Having multiple sexual partners and/or STIs also increases the risk of HIV infection via unprotected sex.

She spent two years, from the age of six to eight, bed bound due to the horrific side effects of HIV.

Ms Goodman said: ‘I had to learn how to walk again along with being tube fed. I missed out on everything.

‘I remember putting up a fight when my grandparents would try and give me the medication as I was just a kid who never understood the disease was life-threatening.’

Ms Goodman was required to take 16 pills twice a day, but she didn’t take them even though this meant if she got a cold or chest infection, she would be fair a lot worse than average person.

She continued in this way throughout her teenage years when she dealt with judgement from her peers.

She said: ‘When I was a teenager, I told one friend I had HIV, who then told my whole school, so I had no choice but to leave without taking my exams.

‘During my teens I was always emotional and feared I was going to die from the infection.

‘I didn’t take my medication as it was just a constant reminder I had HIV.’

When in a relationship, Ms Goodman had a child at the age of 18 which was unplanned.

She was on top of her medication as she didn’t want to risk passing it on to her unborn child.

Then, at the age of 23, Ms Goodman met Mr Hart who encouraged her to take her medication properly.

HIV is known to attack the immune system and those who contract the disease are more likely to be severely affected by common illnesses such as the flu.

Just 4,363 people across the UK were told they had the killer virus last year – a 17 per cent drop in the space of a year.

Ms Goodman said: ‘HIV is treated with antiretroviral medications, which work by stopping the virus replicating in the body. This allows the immune system to repair itself and prevent further damage.

‘Due to being on the medication the amount of HIV in my blood count was low which meant that although there was a risk Jay would get HIV from me when we tried for a child, it was very small.

‘I now had two children who are 12 and five, and we couldn’t be happier.’

Ms Goodman added: ‘The best thing I ever did was get support and I am now lucky to help other people who are suffering in silence whilst refusing to take their medication.

‘It is a form of slow suicide because they are so scared of other people finding out, but actually HIV is very manageable, there is no reason for anyone with it to not lead a normal life.’

It suppresses their viral load so the virus is untransmittable

In 1996, anti-retroviral therapy (ART) was discovered.

The drug, a triple combination, turned HIV from a fatal diagnosis to a manageable chronic condition.

It suppresses the virus, preventing it from developing into AIDS (Acquired Immunodeficiency Syndrome), which makes the body unable to withstand infections.

After six months of religiously taking the daily pill, it suppresses the virus to such an extent that it’s undetectable.

And once a person’s viral load is undetectable, they cannot transmit HIV to anyone else, according to scores of studies including a decade-long study by the National Institutes of Health.

It is 99% effective at preventing HIV

This pill works like ‘the pill’ – it is taken daily and is 99 percent effective at preventing HIV infection (more effective than the contraceptive pill is at preventing pregnancy).

It consists of two medicines (tenofovir dosproxil fumarate and emtricitabine). Those medicines can mount an immediate attack on any trace of HIV that enters the person’s bloodstream, before it is able to spread throughout the body.

It is safe to use physical cash despite coronavirus says ATM...

Boston college student with measles may have exposed thousands to the...

Breath test that could save thousands from food intolerance agony