Renters have been plunged into turmoil as evictions are set to resume after the housing secretary ‘tore up his pledge’ to protect them.

Robert Jenrick introduced a ban at the start of the Covid pandemic which halted all hearings of possession cases as he championed that ‘no renter who lost income due to coronavirus will be forced out of their home’.

But, six months later, the government will allow evictions to resume in England and Wales from Monday.

Alicia Kennedy, who has directed the campaign Generation Rent, told The Times: ‘Robert Jenrick has torn up his pledge to protect renters.

‘There is now nothing stopping tenants who have been given a Section 21 [eviction] notice from being forced out of their home.

‘Even renters in severe financial distress can only buy themselves an extra six weeks’ grace.

‘These new rules provide no comfort and do nothing to prevent hardship and homelessness.’

The ban on evictions has already been extended twice since March as figures from YouGov and Shelter suggest that 322,000 renters have fallen behind on their monthly payments due to the impact of the pandemic.

The government has instructed that bailiffs are still forbidden from evicting those in areas of local lockdown or in the run up to Christmas – apart from in exceptional circumstances.

Labour is also calling for a further extension of the ban similar to that seen in Scotland and Northern Ireland where renters will not face eviction until March 31.

Defending the decision, Mr Jenrick said it was ‘right that we strike a balance between protecting renters and ensuring landlords whose tenants have behaved in illegal or anti-social ways have access to justice’.

But last month, a tenant refused to move out of their Merseyside home and stopped paying rent, leaving the landlords homeless. 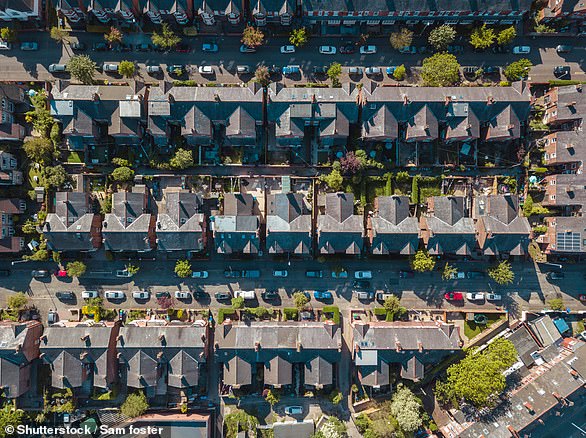 The ban on evictions has already been extended twice as figures from YouGov and Shelter suggest that 322,000 private renters have fallen behind on their monthly payments due to the impact of the pandemic (stock image)

House owners Emma and Russell Burton, 41, are living with her parents in France after the tenant refused to leave, saying he will pay them back ‘when this is all over’.

The family left their home in Newton-le-Willows in early 2019 for Qatar where Emma and Russell found work, and started renting out their home through a letting agency.

Within a few months they decided to return to the UK, but in December 2019 they said their tenants stopped paying their £800 rent and refused to leave the house – meaning they could not return.

‘To help keep people in their homes over the winter months, we’ve changed the law to increase notice periods to six months and introduced a ‘winter truce’ on the enforcement of evictions for the first time.

‘In addition we have put in place a welfare safety net of nearly £9.3 billion and increased Local Housing Allowance rates to cover the lowest 30 per cent of market rents.’

Taking the Land Rover Defender back to its natural habitat

What is greenwashing and how can you know if a company is ethical?