By Max Winters For Mailonline

Leigh Griffiths has returned to Celtic for ‘fitness and performance work’ after spending more than three months off on indefinite leave to deal with mental health issues.

The 28-year-old Scotland striker checked into rehab in December with former manager Brendan Rodgers admitting he had ‘ongoing issues.’

A club statement read: ‘Leigh will be working at Lennoxtown, in conjunction with the club’s medical and sports science staff, with a view to returning to training with the first team in the future.

‘The ultimate aim for both Leigh and the club is for Leigh to get back to training and playing with the first team, but that will take time.’

Celtic manager Neil Lennon said: ‘We are really pleased that Leigh will be looking to get things going again at Lennoxtown and be making a phased return to training. In no way will we put any timescale on a possible return to the first-team. Instead, we will make sure we work with him on the best, most productive way forward.

‘He will really be focusing on his own programme at the moment and then we will see what progress we make from there. We will not rush him in any way and we will allow him, of course, to take things slowly and at the pace he is comfortable with.

‘As the club has been doing throughout the last period, we’ll continue to give Leigh every support to make sure that his health and well-being are our number one priority. We’ll work with him to ensure he has everything he needs to give him the chance to get back to where he was, but understanding totally that he will need time and space. 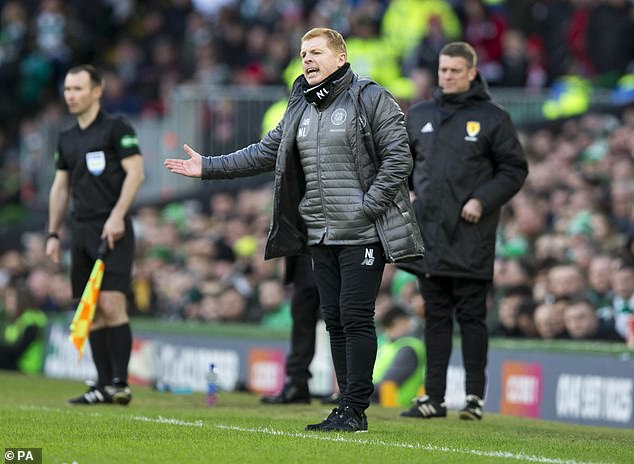 Neil Lennon spoke to Griffiths, who had been given time off to deal with mental health issues

‘It will be great to see him back, even at this very early stage, and we’ll make sure we give him our total support.’

Griffiths added: ‘I’d like to thank everyone for showing me such support across the past few months. I am so grateful to the club for everything they have given me and the way in which they have supported me so strongly.

‘The Celtic supporters, too, have been a huge source of inspiration and strength for me and I want to thank them all sincerely for staying with me. I know it will be a long road back but I am ready to do all I can to get there.’

Coronavirus: Widen rules on where face coverings must be used, say...

Coronavirus: Widen rules on where face coverings must be used, say...

After protests, iconic Lee statue in Richmond to be removed

‘Get your knee off our necks’: George Floyd remembered as a...

MARTIN SAMUEL: Eddie Jones will be content with what he saw...