The fountain of youth? Injecting the BLOOD of young mice into older animals improved memory and learning ability, study finds

By Colin Fernandez Science Correspondent For The Daily Mail

Scientists have identified two ingredients in the blood of the young that reverse the ageing process, a study suggests.

When blood is taken from young mice and injected into old mice it ‘reversed’ any declines in their brains, the study found.

The proteins cause more brain cells to grow, increased the nerve connections between brain cells.

The proteins were tested on human brain cells in the lab and found to have a similar effect, helping the cells to grow and increase the number of connections.

The findings raise hopes that a potential treatment that can act as a ‘fountain of youth’ and by reversing the effects of dementia.

Young mouse (15-day-old; left) and aged mouse (15-month-old; right) mice used in the experiments. When blood is taken from young mice and injected into old mice it ‘reversed’ any declines in their brains

The two key proteins that have the rejuvenating effect are thrombospondin-4 THBS4 and SPARC-like protein 1 (SPARCL1).

Writing in the journal PNAS, the scientists from Stanford write that the compounds increase the number of synapses – connections between brain cells.

In a healthy brain the creation of new synapses balances the loss of old ones, but this process slows as we age, and becomes accelerated in Alzheimer’s disease. Loss of synapses makes it harder to remember things.

The authors Kathyln Gan and Thomas Sudhof write: ‘We asked whether young blood is enriched in factors that act directly on neurons to promote synapse formation.

‘We show that serum from young but not old mice indeed directly boosts synapse formation in cultured neurons, and identify two factors, thrombospondin-4 and SPARCL1, that are enriched in young blood and mediate these effects.

‘Thus, our experiments show that young blood is enriched in multiple factors that directly promote synaptic connectivity between neurons.’

While the two key chemicals have been identified, the scientists say, exactly how they trigger youth-reviving changes is ‘unclear’. 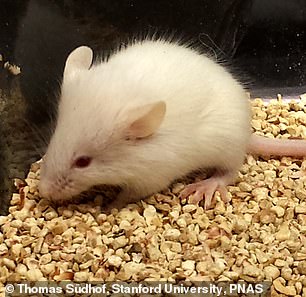 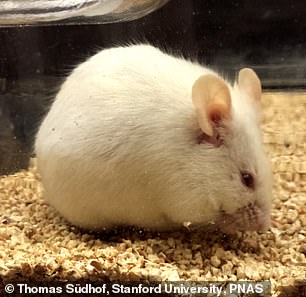 They claim a great deal of further research is needed before it can be shown to work in living humans.

For example it is not yet known whether the proteins can reach the brain – crossing the ‘blood brain barrier’, which filters out large molecules in the blood.

Other fertile areas of research for potential anti-ageing compounds have been human umbilical cord blood cells.

One compound, found in cord cells, called TIMP 1, has previously been found to also have a rejuvenating effect.

Other compounds for which scientists have high hopes is called GDF11, which boosts growth of muscles,

And gonadotropin-releasing hormone (GnRH) which has an effect on growing cells in the hippocampus, part of the brain key to forming memories.

WHAT IS A NEURON AND HOW DOES IT WORK?

A neuron, also known as nerve cell, is an electrically excitable cell that takes up, processes and transmits information through electrical and chemical signals. It is one of the basic elements of the nervous system.

In order that a human being can react to his environment, neurons transport stimuli.

The stimulation, for example the burning of the finger at a candle flame, is transported by the ascending neurons to the central nervous system and in return, the descending neurons stimulate the arm in order to remove the finger from the candle.

All neurons are electrically excitable. The electrical impulse mostly arrives on the dendrites, gets processed into the cell body to then move along the axon.

On its all length an axon functions merely as an electric cable, simply transmitting the signal.

Once the electrical reaches the end of the axon, at the synapses, things get a little more complex.

The key to neural function is the synaptic signalling process, which is partly electrical and partly chemical.

Once the electrical signal reaches the synapse, a special molecule called neurotransmitter is released by the neuron.

This neurotransmitter will then stimulate the second neuron, triggering a new wave of electrical impulse, repeating the mechanism described above.

Ricky Hatton’s son Campbell has big boots to fill but he...

Coronavirus can live in patients for up to FIVE WEEKS after...