The champion with the altered ear isn’t listening. To those who feel Evander Holyfield should find safer pursuits at the age of 57, he has a straightforward answer.

‘They have their opinion and I have mine,’ he tells Sportsmail. ‘I prefer to follow mine.’

And so the man they called the Real Deal is looking to strike another. If he has his way, you suspect that will be with Mike Tyson, who has evidently lost none of his sense of timing.

That relates as much to Tyson’s ability to hit pads cleanly at 53 as it does his decision to release workout videos in close proximity to those uploaded by Holyfield. Purely a coincidence, says Holyfield, and yet it is a fact that a third meeting between two old greats is being discussed by both sides.

Terming it a fight might be a stretch, given Holyfield claims he is only after a three-round exhibition in which there will be ‘no winners or losers or going for knockouts’ — conditions the four-time heavyweight champion of the world says must be upheld as he enters a 10th year since his last bout.

Whether Tyson, even the mellowed version of today, is capable of keeping to such an agreement might be another matter. But at the very least there are negotiations for a third contest between two men whose younger rivalry was in equal parts remarkable and appalling. 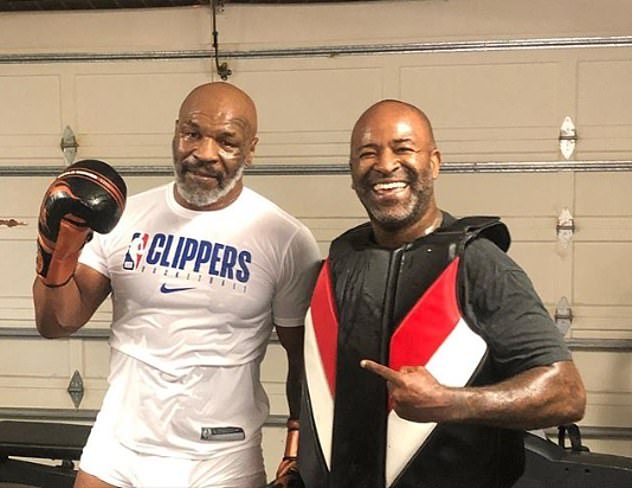 Holyfield won their two fights in 1996 and 1997 and lost part of his right ear in his opponent’s mouth; Tyson was twice outclassed and landed a $3million fine. According to another heavyweight of yesteryear, Shannon Briggs, Tyson is spoken for and a fight agreed, but Holyfield gives the impression a deal can be done.

Holyfield says: ‘Mike and I talked once about this (the exhibition) and from that point on his people have spoken to my people. We are not at a point where we are at an agreement but there have been conversations.

‘There are some big people from different countries who would like for us to do it. My whole thing is, “Yes, if there is a way we can do it, then do it”. Me being me and Mike being who Mike is, I know it could be something big. 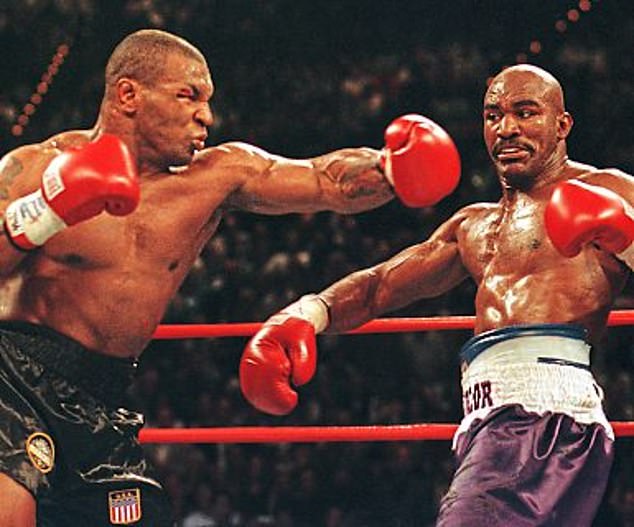 ‘If it could be worked out then there has to be an understanding that there can be none of this other stuff that happens (with Tyson). Ain’t nobody getting a decision or win or lose or going for knockouts. Exhibition.

‘I didn’t really want to get back in the ring because I always said when I stop I will stop. But an exhibition, that is different. I am not killing myself for nobody. I ain’t looking for knockouts and I ain’t going more than three, three-minute rounds. We do it in an appropriate way. But I am going to be in great shape. And if someone thinks they going to hit me, I don’t want them to think I ain’t going to hit them back. I don’t know if it will be Mike. If it don’t work then it weren’t meant to be.’ 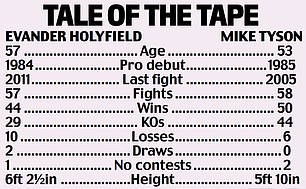 Holyfield and Tyson have long since reached a friendly place, to the extent that in 2013 they filmed a Foot Locker advert in which the latter rocked up on the former’s doorstep and reunited him with his missing chunk of ear.

‘People talk about the ear but people don’t know the relationship,’ Holyfield says.

‘It is long. We came through from amateurs (together).’

For all the water under the bridge, there is still a competitive feeling towards a man with whom, along with Lennox Lewis, Holyfield shared a brilliant heavyweight era.

Referring to Tyson’s recent videos, showing impressive movement 15 years since his own retirement, Holyfield says: ‘Mike was skilful, right back to when we first met. He can jump rope, hit speed bags, pads — but these things don’t hit him back. I have never been very good at hand pads and bags and tricks. But as my coach always said, “When people start getting hit they don’t know if they want to be there”. That is what boxing is really about.’ 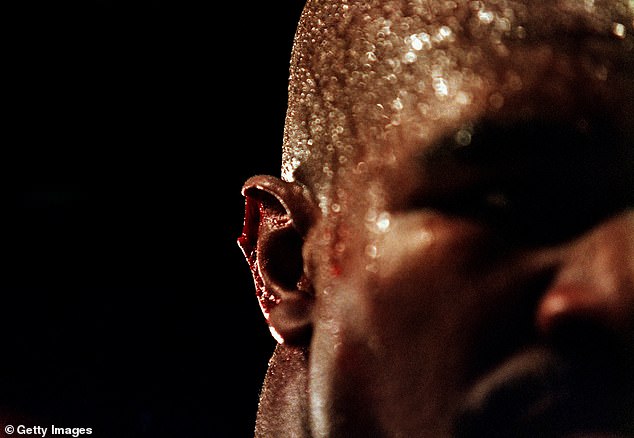 Tyson infamously bit Holyfield on the ear, leading to disqualification in their 1997 rematch

It remains to be seen what kind of fight Holyfield engages in. And time will tell if Tyson is involved. There is also an invitation to Lewis, against whom he drew once and then lost the rematch for the undisputed heavyweight title. ‘If Lennox and I can come together and do something, why not?’ Holyfield says.

In any configuration, amid any outcry that follows owing to Holyfield’s age, an exhibition against a top name from history would make significant money. But Holyfield, whose 57th and final fight was in 2011, is claiming this is not about finances.

It is no secret that Holyfield, who amassed a $300m fortune and once owned a 109-room mansion, lost the lot. A father of 11, including an unbeaten novice professional in Evan Holyfield, he has rebuilt to some extent and is reported to make personal appearances worth $100,000 a month these days. He says his driving force for this comeback is inspiring children.

‘It’s really for my foundation, working with under-privileged kids,’ he says. ‘I want the young people to know that at 57 I can do this because I didn’t make the mistakes others made. My momma always told me, “If you don’t pick up bad habits you don’t have to put them down”.’

Holyfield is unequivocal that this venture will not lead to a competitive return. ‘This is not me going against some 24-year-old,’ he says. ‘I don’t need that. But this is different. It will be fun. If it is against Mike, it definitely will be.’