Pontus Jansson says if Brentford do not make it to the Premier League this summer, it will not be for a lack of positivity around Griffin Park, which hosted its final game after 116 years when the Bees beat Swansea last Wednesday to reach the Championship Playoff final.

Thomas Frank’s side will face west London rivals Fulham at Wembley on Tuesday, after overturning a 1-0 first-leg deficit to beat the Swans 3-1, and Jansson says it was an emotional speech from their young French striker Bryan Mbeumo that fired them up for victory.

The 20-year-old forward had recovered from Covid-19 during lockdown and played an important part in Brentford’s push for an automatic promotion spot, which failed on the final day.

Mbeumo scored his 16th goal of the season to effectively kill off Swansea in the second leg, and Jansson revealed how the France Under 21 striker had fired them up beforehand.

‘The words he gave us, which he read from his phone, came from his heart and it was very emotional. I don’t want to say exactly what he said, but it is always special when it’s a guy that is not very fluent in the language,’ said Brentford’s Swedish captain.

‘At start of Coronavirus he tested positive and he missed his family because he has been in London a long time. He’s only 20 so of course it’s tough for him. But he works extremely hard. I was so happy when he scored that goal – that was one of the proudest moments for me, I said it was like a father celebrating with his son. So, his was a very good speech that helped us a lot.’ 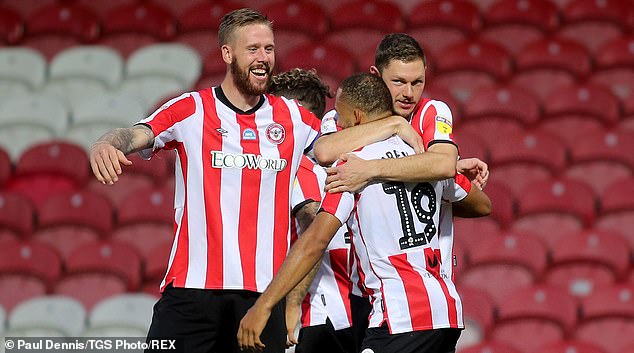 The Bees will face Fulham in the play-off final, with Jansson praising a team-talk from Bryan Mbeumo before the semi-final win over Swansea in which the France Under 21 star scored

Frank is also a great motivator, and Jansson compares him with his former manager at Leeds, Marcelo Bielsa, admitting the Argentinian still uses an interpreter for his team-talks, while the Dane delivers them in English and fills his players with confidence.

‘He’s a fantastic guy and a fantastic coach. He’s always happy, always positive. You always have small issues with every coach you work with, but I really can’t find anything negative about Thomas.’

That positivity was one of the main reasons that prompted Jansson to choose Brentford when he was released by Leeds after their own play-off defeat by Derby last season. He was also fascinated by the statistics-based ‘Moneyball’ approach to recruitment implemented when Rasmus Ankerson became director of football five years ago.

‘My agent called them, and you know how they work at Brentford, he had to send my name and input the data and all those things they like to have. Two minutes later they called and said yes, we’re ready to take Pontus.’ 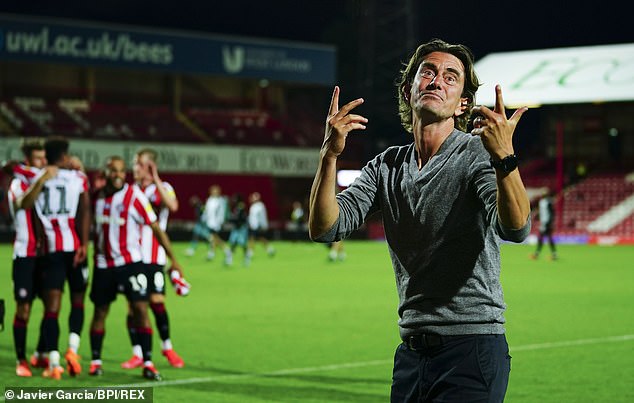 Though he has a close relationship with Frank and Ankerson, he still does not know the full workings of their unique model, which may now be copied by other clubs after the financial impact of Covid-19.

‘I talk a lot with Rasmus because we are both Scandinavian but how they really work? That’s also something I want to know about so as soon as the season is over, I want to learn all I can, because I am really interested.

‘What they have done at this club is just unbelievable. I’m pretty sure it doesn’t stop here now. We know we have a new stadium to forward so hopefully the future is bright for this club.’

Brentford will move into a brand-new 17,500 capacity stadium close to Griffin Park in September, whether in the Championship or Premier League. And Jansson is aiming high. 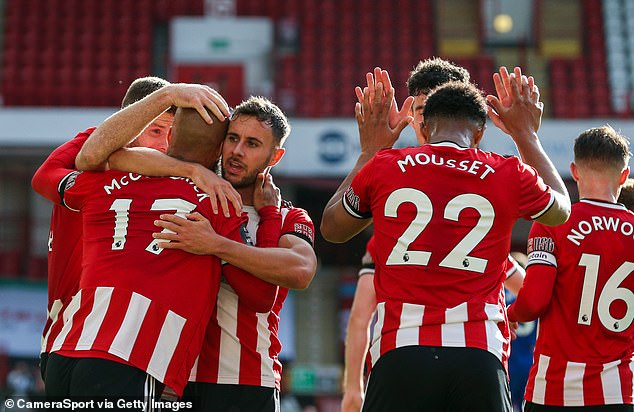 Should Brentford earn promotion, Jansson believes they should aim high like Sheffield United whose return to the Premier League resulted in a highly respectable ninth place finish

No play-off winner has lasted more than one or two seasons in the Premier League since Crystal Palace, who won at Wembley in 2013, but Jansson says they must be positive, if they beat Fulham on Tuesday. ‘You have to look higher than just staying in the Premier League. Look at Sheffield United.

‘When I came to Brentford and was talking to Rasmus I said there is no point looking for a top six finish, it’s better to look at the top two, and then there is a higher chance of being in the top six. Of course it’s a big thing to say if we go up we want to be in the Europa League, but if you look high, then you have a bigger chance to stay up.’

But first come Fulham, who have yet to score against Brentford this season. Centre-back Jansson lives by the motto ‘desire to defend’ and says he loves clean sheets, but he cost one for his side and unnecessary tension by attempting a backheeled clearance that allowed Swansea to score on Wednesday. As a converted forward, he admitted: ‘I was striker until I was 20, so these stupid things are still my head.

‘As a defender at Leeds I used to have one or two mistakes a season in me. I tried to play on the edge which is maybe not always the best way! I wouldn’t say that I’m a showman but when it is a full stadium I like to get things going, but now with empty stadiums, my age and experience and also as a captain you need to lead by example so try to take those things away. Hopefully I’ve made my one mistake for this season and can go out on Tuesday and have a solid game.’