The 18-year-old has signed a four-year deal at the Allianz Arena after he opted to reject his first offer of a professional contract from the Ligue 1 champions.

A France Under-18 international, Kouassi played 13 times for the PSG first-team in the 2019-20 season and heads to Bayern as a Ligue 1 champion after the season was cancelled in France due to the coronavirus pandemic. 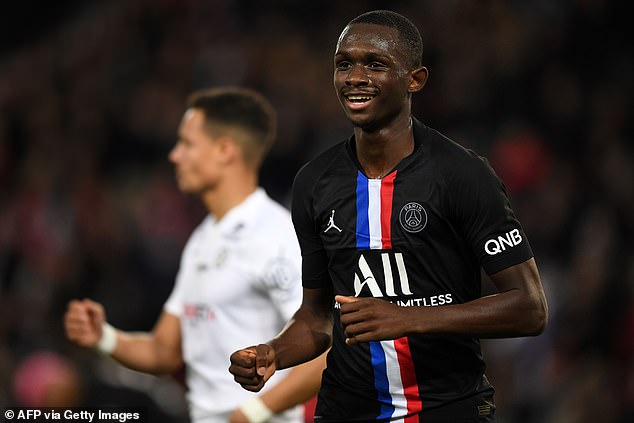 Kouassi was reportedly interesting a host of top European clubs, including Barcelona and AC Milan, but the defender has decided to continue his development in Germany.

‘I’m really happy to be able to play for Bayern. It’s a great club full of tradition,’ the 18-year-old said.

‘I really hope to break through here and make a lot of appearances. I’ll work hard for that.’

Bayern sporting director Hasan Salihamidzic added: ‘We’re very happy to bring Tanguy Kouassi to Bayern. In our eyes, he’s one of the greatest prospects in Europe.

‘His best position is at centre-back but can play in a number of positions. We’re sure he’ll have a great career with us and is a real reinforcement.’ The defender, who is also capable of playing as a defensive midfielder, made his professional debut in December in a 3-1 league victory against Montpellier.

He scored three times in total for the first-team, including a brace against Amiens in February, and was a member of the France squad which finished third at the Under-17 World Cup last year.

It marks Bayern’s second signing in as many days as they agreed a deal yesterday with Manchester City for winger Leroy Sane, for a reported fee of £55m.