The Gunners beat their London rivals 2-1 in a comeback win at Wembley thanks to a double from club captain Pierre-Emerick Aubameyang.

After the match, Arsenal supporters congregated on the streets of north London to celebrate the win and were caught singing and chanting very close to each other despite pleas from the Government to stay at least one metre apart. 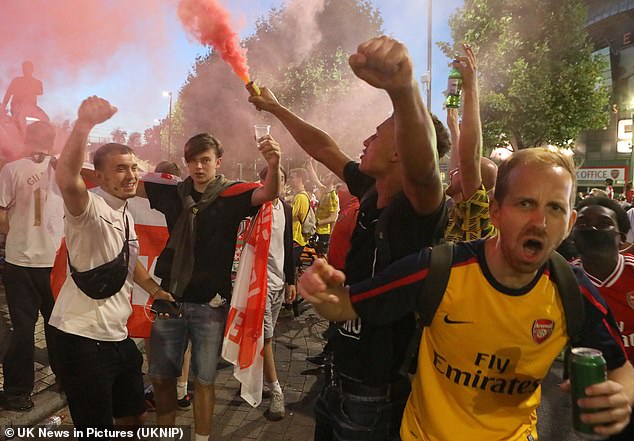 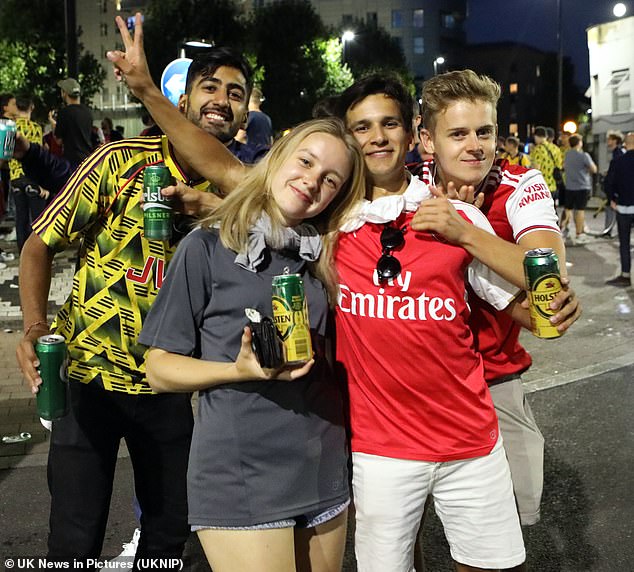 Supporters also let off flares near the Gunners’ home ground, the Emirates Stadium, while some fans were seen jumping up and down inside a bus while not wearing facemasks.

Government rules say it is illegal not to wear a face covering whilst travelling on public transport.

Arsenal fans also climbed on top of lampposts in the north London area as they sung popular chants relating to their team and their rivals.

Police were present during the celebrations, with one Arsenal supporter seen hugging an officer amid all the joy. 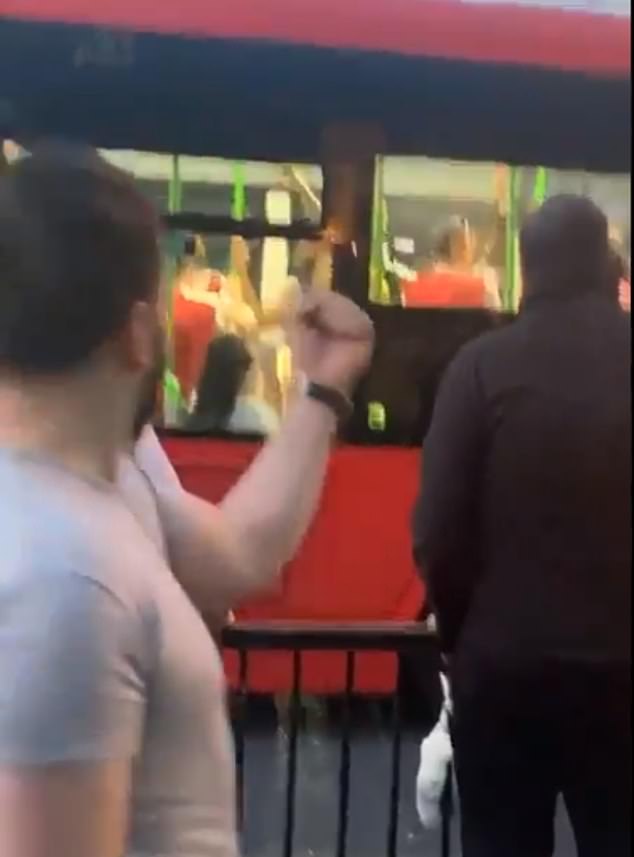 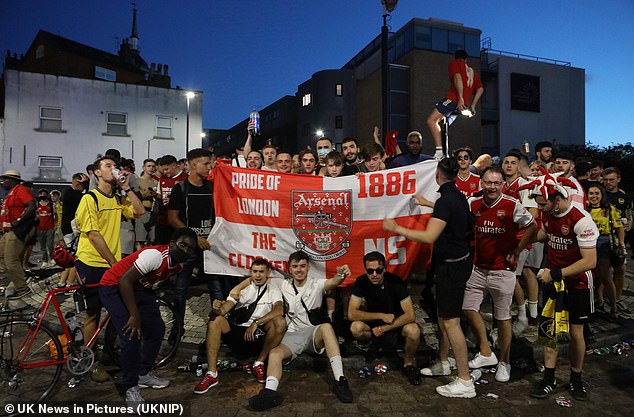 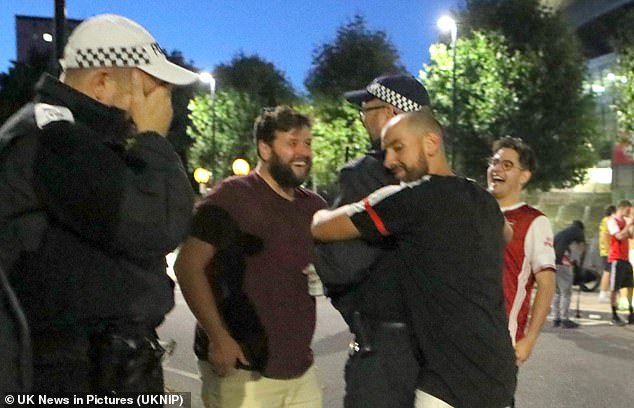 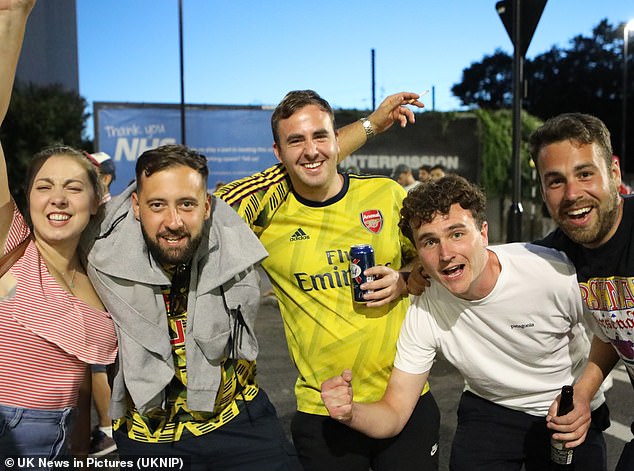 The fans were not allowed inside Wembley for the final, which was played behind closed doors

Saturday’s FA Cup final was played behind closed doors due to the global coronavirus pandemic, meaning Arsenal supporters were not able to witness the cup final win in the stadium.

The north London club normally put on a trophy parade for the supporters on the day after a trophy win but the current health risks mean such an event is not possible this year.

A fan channel associated with the club, AFTV, were also spotted flouting social distancing rules during a live reaction video. 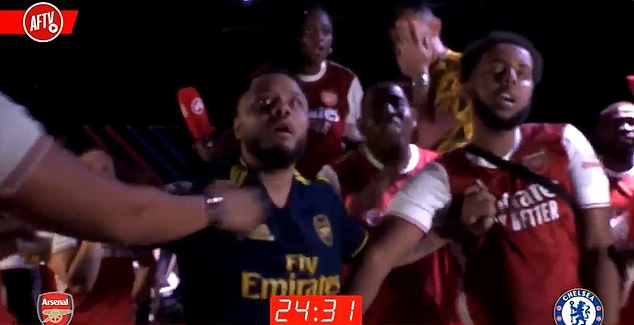 The channel arranged for a large group of supporters to watch the final in a public viewing area and were seen jumping on top of each other whilst celebrating a disallowed goal in the final.

The Wembley win saw Arsenal lift the FA Cup for the 14th time – more than any other club in the competition’s history. 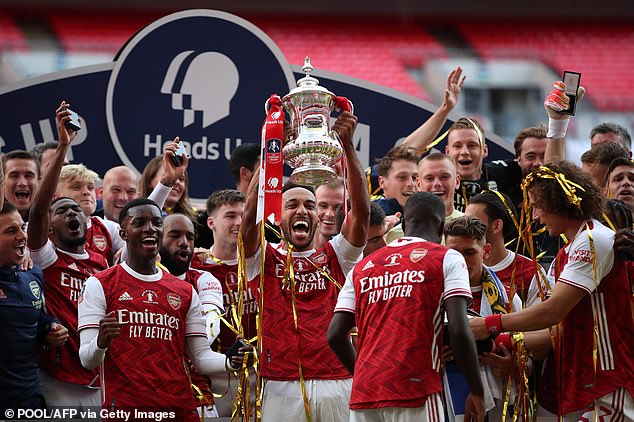 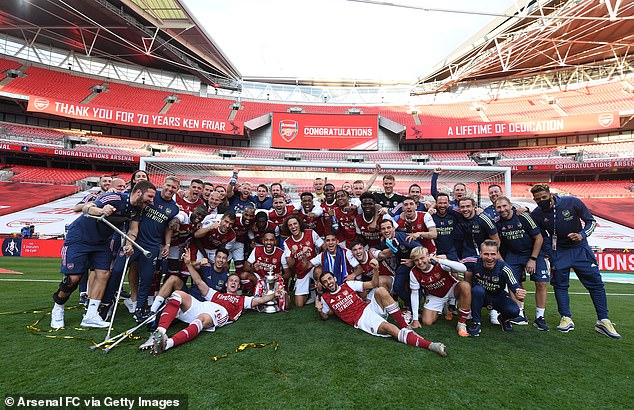 It is the 14th team the Gunners have lifted the FA Cup, it’s also their fourth in seven years

But Chelsea captain Cesar Azpilicueta brought down Aubameyang in the penalty area later in the first-half and Arsenal’s captain picked himself up to score the spot-kick.

Aubameyang then turned the game on its head in the second-half following a clever chipped finish during a swift Gunners counter attack.

That was enough for Mikel Arteta’s side to beat Chelsea, who had Mateo Kovacic sent off late on for two bookable offences.

It is Arsenal’s first trophy win since 2017, when they beat the Blues by the same scoreline in that season’s FA Cup final at Wembley. The Gunners have won the FA Cup four times in the last seven years.

Bayern cannot afford the mood to turn sour at this stage...