Wimbledon will use ‘AI bunker’ to ‘automatically generate’ the best moments for highlights by scanning grunts, cheers and bodily gestures

By Victoria Bell For Mailonline

Artificial intelligence will be at play in Wimbledon this year in the form of software that captures player’s bodily movements to create replay highlights.

IBM’s Watson analyses everything from a player’s celebratory cheers to their fist pumps through a live video stream to record a clip of that point in the match.

Each point is then ranked based on crowd excitement, as well as noises from players, through a microphone placed underneath the umpire’s chair.

Now, for the first time, IBM Watson has been taught to recognise the strike of a tennis ball on a racket.

Artificial Intelligence will be at play in Wimbledon this year in the form of a robot that captures player’s bodily gestures to take instant highlights. Pictured, Andy Murray at the Wimbledon Tennis championships in 2017

‘This allows us to clip the highlights package to be really tight, so it knows exactly when play is happening,’ Sam Seddon, head of IBM’s AI unit at Wimbledon, told the Telegraph.

Last year there were 220 million views of highlights across Wimbledon’s digital platforms.

IBM’s Wimbledon bunker is located within the media centre, and is home to the company’s team of 180 people, who monitor coverage and analysis from all the Wimbledon courts before it is made available to the world.

Every single point is recorded by IBM’s Slamtracker system, including its duration and how it was won, creating a huge wealth of data that can then be analysed by pundits and fans alike.

‘We asked ourselves how do we create video content that’s available really quickly?,’ Mr Seddon said. 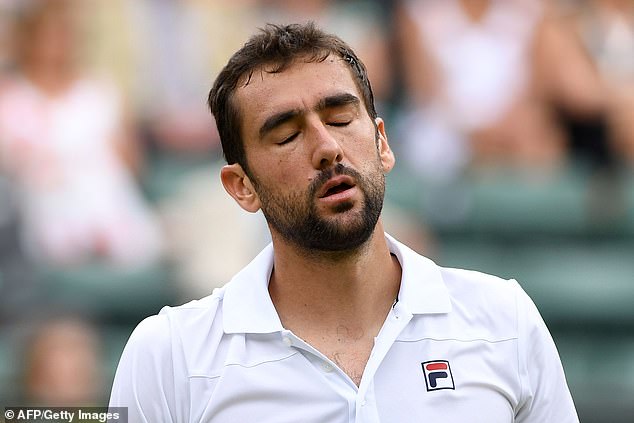 IBM Watson analyses anything from a player’s grimace to their celebratory cheer through a live video stream to take a clip of that point in the match. Here, Croatia’s Marin Cilic reacts against Argentina’s Guido Pella during their men’s singles second round match at Wimbledon 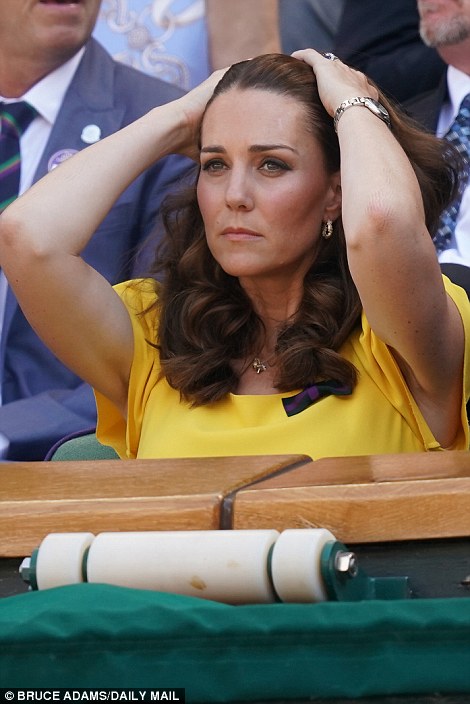 As well as gestures from players, each point is ranked based on crowd excitement, through a microphone placed underneath the umpire’s chair. The IBM system will be able to pick up tennis fan HRH The Duchess of Cambridge’s cheers and gasps 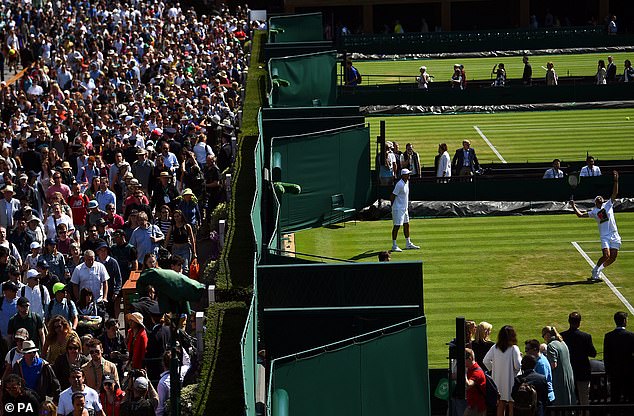 Last year there were 220 million views of highlights across Wimbledon’s digital platforms. Kicking off: Spectators are led into the grounds at the start of day one of the Wimbledon Championships today

‘What are the most exciting moments in a match? You can sit there as a digital editor in a match and make that decision yourself, or you can turn that question over to an AI system.

‘Then we had to define what exciting is – well, let’s listen to how excited the crowd are, let’s look how animated the players are, let’s analyse the data and see whether this is a turning point in the match and use of that to generate highlights.

Wimbledon is rapidly becoming one of the most technology-friendly sporting tournaments in the UK, if not the world.

‘We are continuously expanding what we are doing with AI and this is the most we have ever used at Wimbledon before,’ Mr Seddon said.

The data is also made available to the players and their coaches, allowing them to identify what areas of their game needs improvement.

According to IBM’s website, this data can even be delivered quickly after a match for any player worried about facing tricky post-match interviews.

WHAT WILL WATSON TRACK TO EDIT WIMBLEDON HIGHLIGHTS?

IBM’s supercomputer Watson will track player and crowd reactions and pick up the sound of a tennis ball against a racquet to pick out highlights of this year’s Wimbledon tournament.

The AI, which is largely used for PR stunts, will pick out key moments for Wimbledon officials who then have the option to post them online.

IBM will watch broadcast footage for:

– Hand shaking at the end of a match

Breast is not always best: Pressurising mums to breastfeed ‘can lead to anxiety and depression’

Breast is not always best: Pressurising mums to breastfeed ‘can lead...

Capitol Police officers take a knee to cheers of protesters

Coronavirus: Do not meet others indoors during rain, PM urges

Never be judged for wearing the wrong thing again as Tengai...

Sonos to end support for older speakers in May and says...